Winning Poker: 3 Ways You're Leaving Money on the Table
May 16, 2022 Poker Strategy

It’s 2am and your session is over. You sat down eight hours earlier and now you’re ready to leave. You rack up your chips and have exactly $595. Considering you bought in for $300, you’re leaving up $295. Good for you. You pick up your rack to go, and notice that you’ve left three green chips: $75. No matter. It’s only money. You just leave it there. 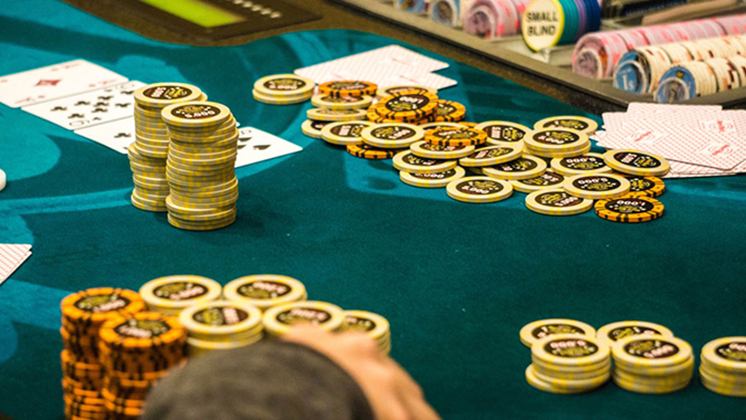 Winning players know how to avoid leaving money on the table at the end of a session. (Image: Seminole Hard Rock)

No poker player has ever done that, ever. Even so, otherwise thoughtful players may often leave money behind on the table in almost as obvious a manner and give it no mind. Here are the three ways they do this:

Not value betting the river

The game is $2/5 No-Limit Hold ’em and you’re up against a calling station. You’re the button and he’s the cutoff. It’s a loose game and you’re holding Q♠ Q♥. There are two callers in front of you, including the calling station. You raise to $20 and everyone folds except the villain, who calls. The flop is J♠ T♠ 3♦.

You’re leaving money on the table.

You should have bet – probably quarter to half pot. Your opponent might have had nothing and folded, or he might have called with some smaller hand. Given how the hand was bet and your read of him as a player, he almost surely doesn’t have a winner.

Sure, he might be setting up some check-raise play with a monster, but you can’t always be afraid of monsters under the bed. Poker is a game of probability, not certainty. It’s much more likely that he has a jack or a 10 or, even worse, and would have called your bet on the river. Otherwise good players fearing the worst sometimes avoid betting on the river just so they won’t bet and lose. But, that failure to value bet and win that money is a big hole in their game. Don’t leave that money on the table.

You have a great table and the stacks are deep. Three of your opponents are fish who have seemingly bottomless pockets, and who keep reloading. There’s no one noticeably better than you, and you’re playing a great game. Filled with confidence, you’ve been running over the table. You’re up $1,100 and feel like you can practically read your opponents’ hands. Even so, you start worrying that you’ll lose back your winnings and are at what you think is probably the high point of your night.

You’re hardly ever up $500 and here you are, up $1,100. Your winning can’t go on forever, you think, so you leave while the going is good to lock in your win. And again, you’re leaving money on the table.

Sure, you’re up, and up a lot, and leaving now will guarantee you have a lot of extra coin in your pocket. But, if you want to be a long-term winner, you can’t think like that. Poker is one long game and this individual session isn’t what matters: the next time you play, you’ll probably find the conditions aren’t so good.

I’ve you’re feeling on top of your game and the conditions are perfect, there’s no good reason why you shouldn’t continue to have a large edge over your opponents and keep making money. The deck doesn’t know that you’re winning, and your opponents may well be intimidated and more easily manipulated than if you were an unknown player or have been losing.

Keep playing while you have this big edge in this great game. If you leave now, you’ll be leaving money in front of other players that might well have ended up with you.

So, you buy in again for another $500, but the guy to your left is picking you apart as if he can see your cards. He three-bets you so many times your head is spinning and, before long, you’ve rebought and are down to your last $200. You’re feeling seasick and demoralized.

You’re leaving money on the table.

In all likelihood, you just left your last $200 on the table. Sure you may win, but you’re drawing very thin, aren’t getting sufficient pot odds, have no implied odds if you somehow hit your hand, and you’ve let your emotions get the better of you. The $200 at the end of your session is worth exactly the same as it was on your first hand when you never would have called in this situation.

Rather than call, you should have given up on the hand, recognized that you weren’t at your best, and taken your remaining $195 and gone right home. You could lick your wounds and come back another day, $195 richer than if you left it on the table for the probable pot winner to enjoy.

When you cash out at the end of the night, you surely wouldn’t leave behind three green chips so, why do so by failing to take the right betting action? The money you leave on the table is money you can otherwise add to your bottom line.