After Winning British Open, Jordan Spieth Makes Case For No. 1

Jordan Spieth is not officially the World’s No. 1 player, but after winning the 146th British Open, Sunday, many think he should be. 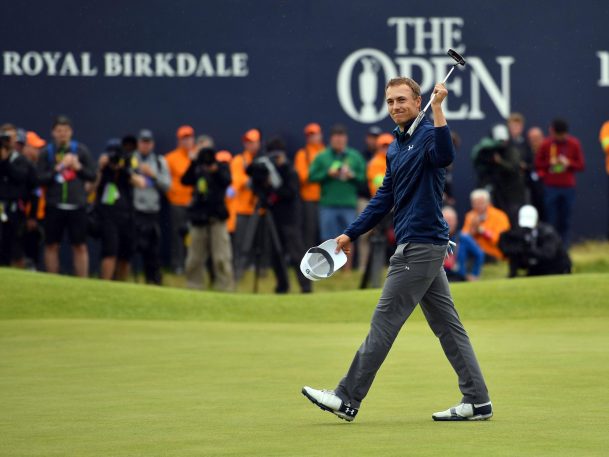 Jordan Spieth won the 146th British Open by three strokes and is one of the favorites to win next month’s PGA Championship. (Image: Associated Press).

The 23-year-old captured the Claret Jug at Royal Birkdale after one of the most thrilling back nines in major championship history.

He entered the final day with a three-shot lead, lost it on the front nine, then battled back on the last nine holes to defeat, Matt Kuchar by three strokes.

The Texan joined Jack Nicklaus as the only other player to win three different majors before turning 24. The only one he hasn’t been victorious in is next month’s PGA Championship.

If he takes that tournament, he will break Tiger Woods’ record as the youngest player to accomplish the career Grand Slam.

Not surprisingly, he is one of the favorites to win the competition, held Aug. 10-13 at Quail Hallow in Charlotte, North Carolina. Along with Dustin Johnson and Rory McIlroy they are 8-1 picks.

That may change drastically after Spieth’s triumph and Johnson’s stumbles. McIlroy has also struggled this year in majors, so he could find himself as the clear choice as the event gets closer.

Making Case for No. 1

Spieth entered the British Open as a 14-1 pick, along with Dustin Johnson, who is currently the World Golf Rankings No. 1 player. Before the British, Spieth came in at No. 3 behind Japan’s Hideki Matsuyama. Afterwards, he moved to No. 2, but is still a ways behind Johnson.

He is no stranger to being the highest ranked golfer. Spieth held the best position for 20 weeks from November 8, 2015 to March 26, 2016 and has been there on three other occasions.

Johnson has held a tight grip on the top spot since winning the Genesis Open, February 19 at Riviera Country Club in Southern California.

Since climbing to first, Johnson has been the favorite in every major championship, but has not come close.

Staying on Top not Easy

Though Johnson has a sizable lead in the rankings, he has done little in marquee events. In April’s Masters, he fell down some stairs the day before the first round and injured his back.

He was forced to withdraw and didn’t play again until the following month, when he finished second at the Wells Fargo Championship.

At the U.S. Open, he struggled, however, missing the cut by three shots. The British wasn’t much better as he tied for 54th.

Spieth has bested Johnson in all three majors. He finished tied for 35th at the US Open and was tied for 11th at the Masters.

The PGA Championship could be his coronation. He has finished second and tied for 11th his last two outings and is playing strong enough golf to win at Quail Hollow.