With shared European liquidity on the horizon, French poker site Winamax is preparing for expansion by signing two of poker’s most promising up and comers, who between them have nearly $19 million in tournament earnings. 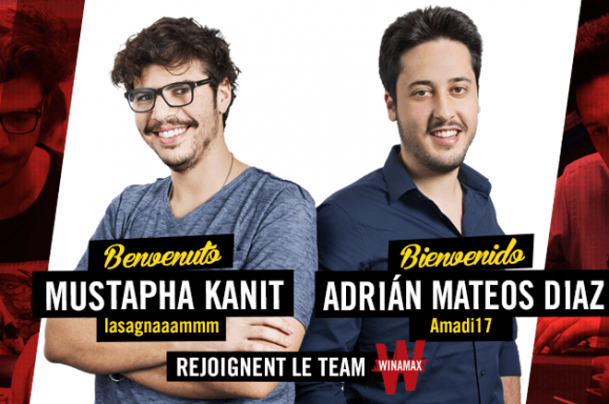 French site Winamax is pinning its expansion hopes on Mustapha Kanit and Adrian Mateos, neither of who are over 26 years old. (Image: Winamax)

In the past, Team Winamax has limited itself to pros from France, such as Patrick Bruel and Sylvain Loosli. But with France slated to share player pools with Italy, Spain and Portugal, all countries that previously operated segregated markets, the site has gone after players from those countries.

Adrian Mateos hails from Spain, and Mustapha Kanit is from Italy. Mateos sits second on his country’s all-time money list (behind Carlos Mortenson) with $9,656,638 in career live tournament winnings. Kanit ranks first among Italians, having won $9,261,556 in just more than eight years of tournament play.

Other resume highlights include winning the PokerStars Championship Monte Carlo Shot Clock High Roller for $988,924, and a month before that finishing runner-up to Dietrich Fast in the Seminole Hark Rock Poker showdown High Roller for $413,567.

“I think Winamax is going to play a very important role in the new market,” Mateos told Poker-Red after his signing. “I know they will fight to be an exemplary room.”

Meanwhile, 26-year-old Kanit broke onto the poker scene in 2011 when he won the Italian Poker Tour Season 2 Nova Gorica Main Event for $276,400. After that, he began traveling the world and quickly shot up the poker hierarchy.

The poker world has been chock-full of signings in 2017. In July, PokerStars brought on Twitch streamer Jeff Gross, while another streaming sensation, Parker “Tonkaaaa” Talbot joined forces with both 888poker and Upswing Poker.

More recently, Partypoker has been making moves to shore up their pro team. In May, they brought on British online superstar Patrick Leonard to help represent the company as they developed a new VIP program, and four months later Party inked arguably the hottest player in the game, Fedor Holz.

Partypoker didn’t stop there, though. Just a couple weeks ago they brought poker pro Jason Koon onto the team.

“I’ll be rocking the patch, of course,” Koon told CardsChat in an exclusive interview. “The main thing I want to be around for is to talk with the poker community and do my best to actively help Partypoker make changes that reflect player’s interests.”

Poker sponsorships dried up considerably after Black Friday. But as the game continues to evolve with the growing popularity of live streaming coverage, as well as new markets coming into focus, more opportunities are emerging for pros representing sites around the world.

In the past, Team Winamax has limited itself to pros from France, such as Patrick Bruel and Sylvain Loosli.

This is wrong news

they were living in the UK 😛