Will Zynga Poker’s New Snapchat Lens be Good For the Game?

Zynga Poker is hoping to make poker fun again with a new Snapchat filter that allows fans and players to send themed messages to their friends. 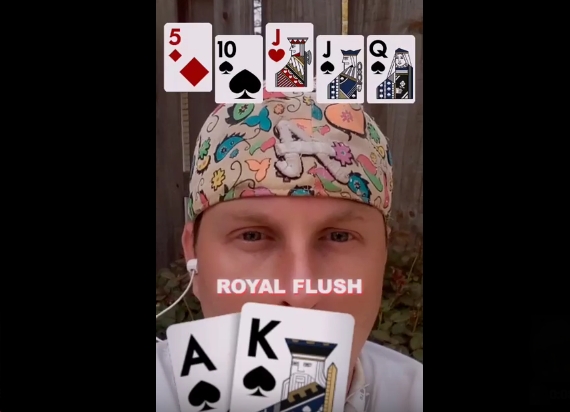 Will Zynga Poker’s Snapchat lens encourage a wave of new players to take up the game? (Image: YouTube.com/ ToyBox23 Productions)

Not one to miss out on the latest online trends, the free-play poker and games developer has created a Snapchat lens where users can film themselves trying to make a hand.

The premise is simple: a user aims their cell phone’s camera at their face and a poker hand is played out.

Once the software detects their facial movements, two cards are dealt face down as is the flop. The action is then paused until the user raises their eyebrows to reveal the turn, river and their hole cards.

If the cards on screen make a winning hand, a victory tune is played as money rains down.

A Bit of Fun with a Useful Edge

Although the lens is designed to be a bit of fun, it is fully interactive which means the action doesn’t take place until the user decides to make it happen. Additionally, the money only starts to fall if a ranked poker hand appears which actually adds an element of competition to the lens.

Because the showdowns are completely random, Snapchat users could theoretically set up friendly competitions to see who can make the best poker of the day.

On top of this, the fact complete poker novices will get to see how a poker hand actually works could also serve as a great introductory learning tool for newbies.

According to the stats, Snapchat has 158 million active daily users, which translates into 2.5 billion Snaps sent, on average, each day.

This level of activity means that not only will Zynga Poker receive a huge amount of exposure from the new lens, but poker as a game will start to flow into the mainstream’s consciousness.

Despite being a free-play site, Zynga Poker has a seven-day traffic average of 38,500 players, which is more than double PokerStars’ play money site. Moreover, it’s almost 3X more than PokerStars real money site and over 10X more than the IDNPoker Network.

While the movement of players from play money sites like Zynga to real money poker hasn’t been accurately tracked, the natural assumption is that there is some crossover. However, even if there isn’t, the fact more people are being exposed to poker is likely to be a good thing for the game.

Of course, even if the new Zynga Poker Snapchat filter doesn’t encourage new players to ante-up, there’s a chance established grinders will use the lens as another way to make prop bets.

Whether that means betting on who can make the best hand of the day or what the hand ranking will be, the game’s action junkies will likely find a way to add a financial edge to the fun.