A federal online poker ban in the US could become the subject of the current lame-duck congressional session talks, according to NevadaWatchdog.org. 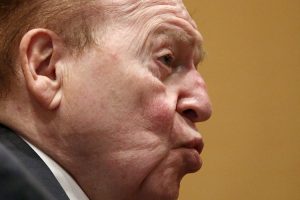 Will Sheldon Adelson get his way and push through an anti-online poker bill during the final lame-duck Congressional session of 2016? (Image: Reuters/Yuya Shino)

With Donald Trump poised to succeed Barack Obama as the next American president, Congress is now in its traditional transitional period. While the new president’s stance on online poker is as yet unclear, we do know that those in favor of a ban could still have an influence on Congress before the new term starts.

Outlined in a recent article on the subject, the issue of a federal ban on the industry may make a “nice parting gift” for US Senator Harry Reid (D-Nevada). Despite lobbying to have online gambling legalized in Nevada, Reid is rumored to have worked with Sheldon Adelson on a 2014 lame-duck pushback in 2014.

Do Words Speak Louder than Actions?

Although he denied the allegation, Reid did say that anyone playing online poker must be “crazy.” This attitude could easily evolve into something more serious for the industry if Reid wants to stir things up right before he retires. Although he recently told GamblingCompliance.com that he doesn’t “plan on doing anything” during the latest lame-duck session, this is by no means a guarantee.

To make matters worse, Adelson donated $20 million to the pro-Republican Senate Leadership Fund in September. After funding the PAC, three GOP senators introduced a bill to the House that would prevent financial institutions from processing online gambling payments.

As yet, the bill, which is sponsored by Sen. Tom Cotton (R-Arkansas), hasn’t made any movement, but it shows that Adelson is still looking to buy influence for his anti-online poker efforts.

The Las Vegas Sands CEO also pumped money into Trump’s super PAC, giving him immediate access to the billionaire once he takes office in January. For now, however, the lame-duck session appears to be the casino magnate’s best chance of stopping online gambling.

Fortunately, there are many influential figures that are on the side of our industry. The Taxpayers Protection Alliance (TPA) told Watchdog.org that it is pushing back against a potential ban, because such matters have traditionally been beyond the remit of Washington.

Stressing that he isn’t making a judgment on whether online gambling is good or bad, the president of the TPA, David Williams, said it’s in the interest of US citizens and the political system if the wishes of one man aren’t made into law.

“If a state wants online gambling, they should be allowed to do it. If a state doesn’t want to do it, that’s also their choice. [Adelson] is trying to stop online gambling because he wants people to go to Vegas and his hotel and gamble down with him. I don’t begrudge him that, but just don’t use the federal government to try to get legislation passed to protect your own interests,” Williams told Watchdog.org.

Anti-online poker bills have been a thorn in the industry’s side for many years. Although some may feel the latest push is a major threat, history would suggest otherwise. While it’s true Adelson may have more influence in the White House than he once did, the financial and economic arguments for regulation of the industry may just be more appealing to Trump.