Will Kassouf and Stacy Matuson to Play Heads-Up Grudge Match

Will Kassouf went from unknown British poker pro to the talk of the poker world following ESPN’s 2016 WSOP Main Event coverage. He used “speech play,” considered annoying to some and entertaining to others, to gain information on his opponent’s hands. 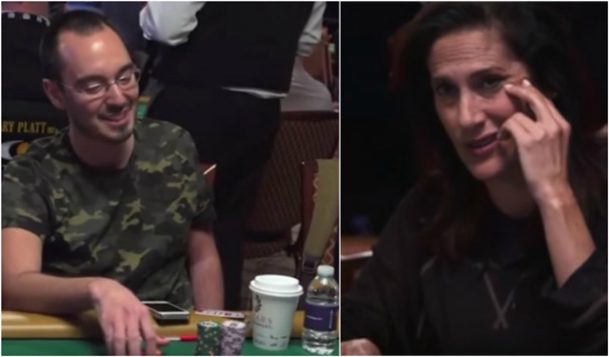 Will Kassouf and Stacy Matuson will face off in a heads-up grudge match on February 2 at 888Poker Festival. (Image: beatthefish.com)

During the television coverage, his constant chatter led to some heated arguments. In his final hand, Kassouf ran pocket kings into Griffin Benger’s pocket aces. The aces held up, sending Mr. Speech Play to the exits in 17th place.

But what made that hand so memorable was the pre-flop banter between the two players. Benger got fed up with his opponent’s constant table talk.

When Kassouf shoved all-in, Griffin slammed his pocket aces on the table to make the call.

Time to Settle a Dispute

Kassouf and Matuson went back and forth in some crucial hands. The Brit used his speech play to irritate her, hoping to get her to fold when he had a weak hand or call when he had a monster. That caused him to receive a penalty when tournament Jack Effel had enough of his behavior.

Although months have passed since the battle, the rivalry hasn’t stopped. The two poker enemies will take their dispute to the 888Live Festival in Rozvadov in February. Shots were fired by Matuson on Instagram.

“Hey Willy K, you think you’re a boss because you bluffed me? I challenge you to a heads-up match at 888live Fest at King’s Casino,” she announced in a video. “I’ll be there from Feb. 1 to Feb. 6. This is a trophy you can’t buy. Let’s see who the real boss is.”

Kassouf accepted the challenge in a Facebook post. The match will take place at King’s Casino. They will play a best of three match. The players haven’t announced the buy-in yet.

Poker players don’t settle disputes with their fists on the playground after school. They handle their business on the felt.

Matuson and Kassouf aren’t the only poker pros scheduled to settle a dispute in a heads-up grudge match. Cate Hall and Mike Dentale will do the same on Poker Night in America in March.

Dentale and Hall make the Matuson/Kassouf feud seem tame. These two players genuinely hate each other.

Poker fans now have two heads-up battles to watch in the coming months. Who do you think will win?