Will Kassouf, Matt Savage Cause Controversy Ahead of WPT Bay 101 Shooting Star

Will Kassouf, the British poker player who caused a commotion at this year’s WSOP, is stirring up controversy once again, and he hasn’t even played a hand yet. 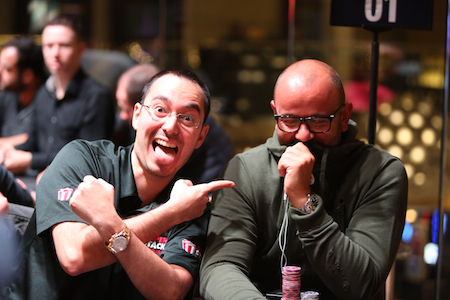 With the 2017 WPT Bay 101 Shooting Star classic set to take place between March 5 and March 10, tournament director Matt Savage has been busy finalizing his bounty players. With $2,500 on the heads of 50 well-known faces, Savage is hoping for another strong turnout.

In fact, this season, Savage is hoping to top last year’s 753 entrants by selecting “Shooting Stars” based on the three Ps: their level of personality, how personable they are, and how popular.

The decision to pick players that satisfy at least one of these conditions has led Savage to include the controversial Kassouf in this year’s line-up.

A relative unknown on the world poker scene before the 2016 WSOP Main Event, Kassouf shot to fame after his slow play and trash table talk made him a much-talked-about feature of ESPN’s broadcasts. Although he eventually hit the rail in 17th place for a $338,288 pay day, it was his antics at the felt that have made him a polarizing figure among the poker community at large.

For many, including Savage, the Brit’s penchant for taking his time over every decision, known as “tanking,” while taunting his opponents, was in poor taste. But, just as Phil Hellmuth and Mike Matusow made a name for themselves by berating other players, Kassouf is now something of a celebrity in the community.

To that end, Savage has deemed Kassouf worthy of a place in the tournament, but at least one long-standing pro isn’t happy. After learning of Kassouf’s status as a Shooting Star, Kathy Liebert aired her discontent via Twitter.

“I think it’s ridiculous that they make Kassouf a star at Bay101. Rewards a guy who gets attention by annoying players and for penalties?!” tweeted Liebert.

Unsurprisingly, Savage wasn’t going to sit by and let Liebert take a shot at his decision without responding himself. Defending the move via a lengthy Facebook post, Savage told Liebert that while he respected her skills as a player, someone like Kassouf is vital to the appeal of the tournament.

Taking it Back to the Old School

In a game filled with young, technically solid poker players, Savage admits that it’s become harder to find the right balance between skill and entertainment. Unlike ten years ago, when Liebert and her peers were able to combine poker and personality, many of today’s grinders refuse to engage with amateurs, according to Savage.

With the Bay 101 Shooting Star as much of a chance for satellite winners to have some fun with the pros as it is to win a WPT title, Savage wanted to bring in players like Kassouf to mix things up. Of course, when you play with fire, there’s a chance you’ll get burned, but Savage is willing to take that risk for the good of the tournament.

“I have already informed [Kassouf] that slow play, excessive tanking, and stalling will not be permitted in my events and he has ensured me there wouldn’t be,” wrote Savage.

Will Kassouf listen to that warning, or will he be up to his old tricks again when the event kicks off? Whichever way he swings, it will certainly make the event a lot more entertaining for all involved.

So many haters lol ( jealousy) gets you no where! He’s a big character and great for the game. Plus he’s a great player , one of the best in the world! And has the following of all us brits!! Hope he smashes it again , just like he did in WSOP and Prague EPT!! And other events he’s won. ????#likeaboss ?