Third Time’s the Charm for Will Berry, Who Took Down the WSOP Circuit Tulsa Main Event for $180,806

The World Series of Poker Circuit just wrapped up its first-ever stop at the Hard Rock Hotel and Casino in Tulsa, Oklahoma.

By all accounts the WSOP Circuit Tulsa was a rousing success, and this past weekend it culminated with $1,675 Main Event, which attracted 574 entries and was won by 25-year-old poker pro Will Berry for $180,806 and a seat into the 2017 WSOP Global Casino Championship. 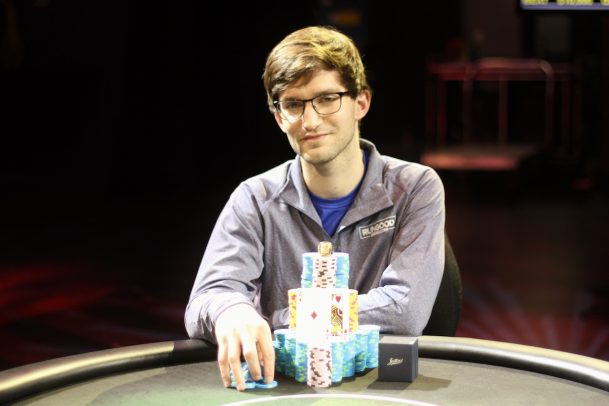 After making three consecutive WSOP Circuit Main Event final tables in Oklahoma, Will Berry finally broke through to win one for $180,806. (Image: WSOP)

Will Berry Finally Gets Breakout Win

Berry is no stranger to WSOP Circuit final tables in Oklahoma, in fact this was his third consecutive appearance at one. Back in January, he finished ninth in the WSOP Circuit Choctaw Durant for $37,240, and the year before that he finished fourth in the same event for $136,812.

“I’m a little relieved,” Berry told WSOP officials after his win. “I’ve played a lot of these tournaments and never managed to finish better than fourth place. So to finally win one feels great.”

To win the WSOP Circuit Tulsa Main Event, Berry had to beat four-time ring winner Daniel Lowery in heads-up play. In what would be the final hand of the tournament, the blinds were 50,000/100,000/10,000 when Lowery opened with a raise and Berry moved all in.

“[Lowery] was the toughest player at the table, and for a lot of the tournament we played together quite a bit,” Berry said of his opponent. “And I was just as careful as I could be to stay out of his way, and let the other players bust to him. I got a lucky table draw having Dan on my right.”

The Main Event wasn’t the only tournament held at the WSOP Circuit Tulsa. Like most stops, a dozen gold ring events were held, and there were some notable winners.

In Event #8: $580 No-Limit Hold’em, Sal DiCarlo came out on top of a 236-entry field to win $29,502 and his second gold ring. Also going deep in that event was Evans, who finished in fourth place and extended his lead in the WSOP Circuit Tulsa Casino championship race. The winner of that title would also lock up a seat into the 2017 Global Casino Championship, which will be held at Harrah’s Cherokee in August.

Here’s a look at all those who captured rings at the WSOP Circuit Tulsa stop:

The WSOP Circuit now heads to Horseshoe Council Bluffs from March 30 through April 10.