Last night’s Monday Night Football game between the Kansas City Chiefs and the Washington Redskins dealt quite the bad beat to some sports bettors when Justin Houston scored an otherwise meaningless touchdown at the buzzer to put the Chiefs ahead 29-20. 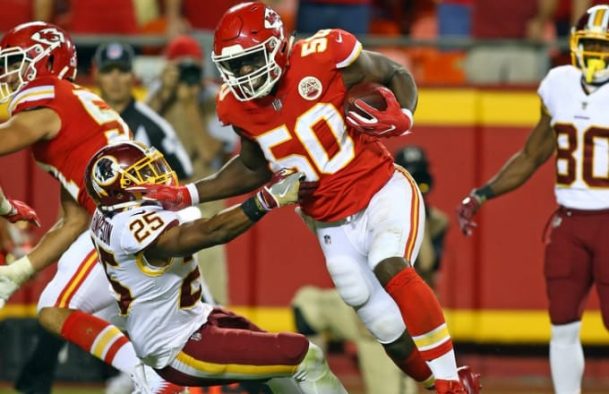 With :47 remaining in the 4th quarter, Dustin Hopkins of the Redskins kicked a 40-yard field goal to tie the game at 20-20.

Thanks to a 37-yard pass from Alex Smith to Albert Wilson on the second play of the ensuing drive, putting the ball on the Washington 34-yardline, Kansas City, in front of its sold out home crowd, was in position to kick a game-winning field goal.

Three plays later and the ball on the 25, Smith spiked the ball with eight seconds remaining, an odd decision by head coach Andy Reid given the Chiefs could have just run the clock down under three seconds before using its final timeout.

This is where things got interesting, if you had money on the game.

Redskins and the ‘Under’ a Lock?

Kansas City was a 7-7.5-point favorite, depending on the sportsbook, at the time of kickoff and the over/under closed at 48.5 points. So, given there was only eight seconds remaining, the under and a Redskins cover was virtually a lock. Or, was it?

Recently signed rookie Harrison Butker, making his NFL debut, lined up for a 43-yard field goal and buried it dead center, giving the Chiefs a 23-20 lead with just four seconds remaining. Barring an unlikely kickoff return or fluke hail Mary for a touchdown, the game was over.

With just :03 left on the clock and 75 yards from the end zone, quarterback Kirk Cousins dumped a short pass to Jamison Crowder who then lateralled the ball back to his quarterback who failed to make the catch.

As time expired and the ball resting on the turf, Jordan Reed of the Redskins picked it up and immediately lateralled it to his teammate Chris Thompson who was unable to corral the ball. Chiefs defensive end Justin Houston then recovered the fumble and ran it in 13 yards for a touchdown to make the score 29-20 with no time left on the clock.

Those who had money on Washington against the spread and the under to cover lost both wagers in the most improbable fashion.

Kansas City moved to 4-0 on the young season, the lone remaining unbeaten in the NFL. The Redskins dropped to 2-2. And many gamblers around the country suffered one of the sickest bad beats in sports betting history.

To those individuals, we would totally understand your desire to boycott the NFL after that game.