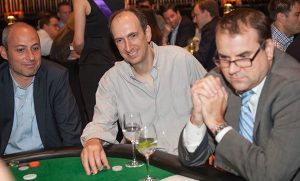 Poker pros, investors and celebrities come out in force to ante-up for a good cause in New York. (Image: takemetoschool.org)

Wall Street traders, poker pros and celebrities recently came together for the sake of charity and entertainment.

Anteing up inside Gotham Hall in Manhattan, the group of high flying financial experts managed to raise $850,000 for Education Reform Now which is an advocacy organization that’s committed to making sure all kids can access high-quality public education.

Thanks to the efforts of Michael Sabat, an equity-derivatives trader at Sanford Bernstein, as well as a slew of poker pros, including Phil Hellmuth (the official tournament emcee) and Dan Fleyshman, the sixth annual Take ‘Em to School tournament was a storming success on all fronts.

In fact, in among the investment geniuses paying $2,000 for a seat in the game, some of poker’s famous faces, including Vanessa Selbst, Erik Seidel and former trader Andy Frankenberger, joined the action, as did the likes of Shannon Elizabeth and former NBA stars Allan Houston and Charles Smith.

Commenting on the Take ‘Em To School event, Fleyshman stated that it was a great event for all involved.

“250 players entered the hedge fund charity poker tournament last night in N.Y.C. and I managed to make the final table raising money for their great cause,” said Fleyshman.

In addition to heading out on the fund raising trail in Manhattan on Wednesday, Vanessa Selbst was also in New York to help finalize the details for another poker charity event.

Meeting with the people behind Urban Justice, Selbst was on hand to organize the Blind & Justice poker night in September.

“Back in NY, prepping to make my 1st charity event one for the ages. You gotta come. I know how to throw a party,” tweeted Selbst.

Also set to feature Daniel Negreanu, the September 29 event will take place inside New York’s Current (Pier 59) and tickets for the event cost $1,000 per tournament player and $500 for non-playing guests.

As well as getting the chance to raise some money for charity and attend a poker lesson with Selbst and Negreanu, the finalists will take home a selection of prizes with the eventual winner taking home more than $15,000.

While the occurrence of two poker charity events in the space of a few months might not be enough to persuade New York legislators to regulate online poker within the state, it’s certainly another positive marker for the industry as a whole.