Christoph Vogelsang won more on Thursday than the average American makes in a lifetime. The 31-year-old poker pro took down the 2017 Super High Roller Bowl at Aria in Las Vegas. Winning the annual no-limit hold’em tournament with a $300,000 buy-in paid the German national $6 million. 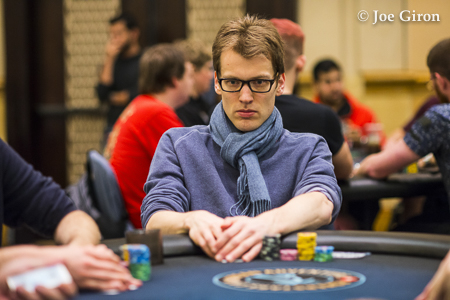 It was the second straight year that a German won this high-stakes event that is growing in field size and prestige. Rainer Kempe took it down in 2016.

The SHRB 2017 started with 56 players. Three remained as Day Five got underway on Thursday. Jake Schindler had an overwhelming chip lead over Vogelsang and Stefan Schillhabel as play started. But poker players know just how sick the river can be (more on this later).

Schillhabel didn’t last long. He began play as the short stack, and busted early to Vogelsang, setting up an epic heads-up match.

In the end, Schindler, a high-stakes cash game specialist with an impressive tournament resume, would pay dearly for one questionable decision.

In heads-up play, Schindler limped on the button with A♠K♣. His opponent raised to 400,000 with K♦J♦. Schindler re-raised to 1.2 million, and Vogelsang called.

The flop came 5♦7♦4♥. Vogelsang checked and Schindler fired a continuation bet of 650,000. With Vogelsang starting the hand with only about 5.2 million, an all-in shove with the flush draw appeared imminent, but instead he called, which surprised commentator Nick Schulman.

Schindler hit a dream card on the turn, with an A♣. He bet 1.4 million. Vogelsang called.

He got it (9♦) but decided to check. This put Schindler in a difficult position. He wanted to get maximum value out of his top-pair, top-kicker. But he also had to take into consideration the small number of weaker hands that would call another bet.

But he chose to go all-in and was snap-called. The hand gave Vogelsang a sizeable chip advantage. He would hold on to win. Schindler took second place for $3.6 million.

Vogelsang has been a successful cash game and online poker player, playing under the screen name “26071985” on PokerStars and previously as “Tight-Man1” on Full Tilt. But he hasn’t grinded the live tournament scene much.

When he wins, he wins big. Vogelsang now has more than $13.7 million in lifetime live tournament winnings from only 22 cashes. That computes to more than $622,000 every time he finishes in the money, and places him second on Germany’s impressive all-time winners list.

He showed during the Super High Roller Bowl that he’s fit to play live poker, capable of keeping any physical tells in check to avoid giving his opponents reads.

Despite his lack of experience in live tournaments, after claiming the SHRB 2017 title and prize ring, Vogelsang is the second most winningest tournament player in German history. He sits behind Fedor Holz, last year’s SHRB runner-up, who has nearly $23 million in tournament winnings, and five spots ahead of Kempe, last year’s SHRB winner.

Oh wow. Always on the river shit happens haha. Congrats to him 🙂