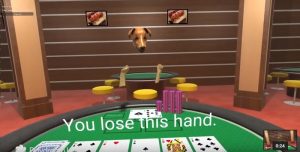 Virtual reality (VR) poker dogs could hold the answer to online harassment according to the software developers at Google’s Daydream Labs.

As the VR craze starts to make its way into people’s homes via products like Oculus Rift, the issue of personal space is one that industry insiders are now trying to solve with the help of poker.

Chat box trolling is something that many online poker players will have experienced, but if VR become a more prominent part of the industry then it could be taken to a new level.

Because VR games make it possible for multiple people to interact with the same environment, any poker operators that venture into this sphere may have to contend with players trying to steal an opponent’s chips.

Essentially an advanced form of harassment, the issue is one that developers want to resolve before VR becomes a mainstream hit and Google believes it has the answer.

Using a concept known as a “personal space bubble,” Google believes that graying out certain areas of the room will dissuade players from harassing their opponents.

To demonstrate the new technology, Google has released a video which shows two virtual dogs playing poker. After losing a hand, one of the dogs gets up from its seat in an attempt to steal the other’s chips.

However, as they leave their seat and make a beeline for their opponent’s stack, the screen goes grey and their avatar disappears.

Once the dog realizes that its immediate environment have been negatively affected by their actions, they return to their seat and the lights are essentially turned back on.

In addition to punishing negative behavior with monotone screens and unresponsive environments, Google is experimenting with positive reinforcement. If players high-five each other, a firework display takes place as a reward for being friendly.

While the use of dogs playing poker is meant as a bit of fun and possibly a nod to Ivan Pavlov and his classical condition studies, the technology does have serious applications.

Just as trolling and personal attacks can happen at the online poker tables, they could also take place in other games where multiple players occupy the same space. As VR evolves and interactions increase, the issue of players harassing others is likely to increase which is why Google’s “personal space bubble” concept could be extremely valuable.

Although it won’t eradicate the problem completely, especially if someone is on tilt, it should go some way to limiting the attacks of VR trolls in the future.