The 2020 Aussie Millions Main Event is over, and Australia’s Vincent Wan has become the latest champion after beating Ngoc Tai Hoang heads-up. 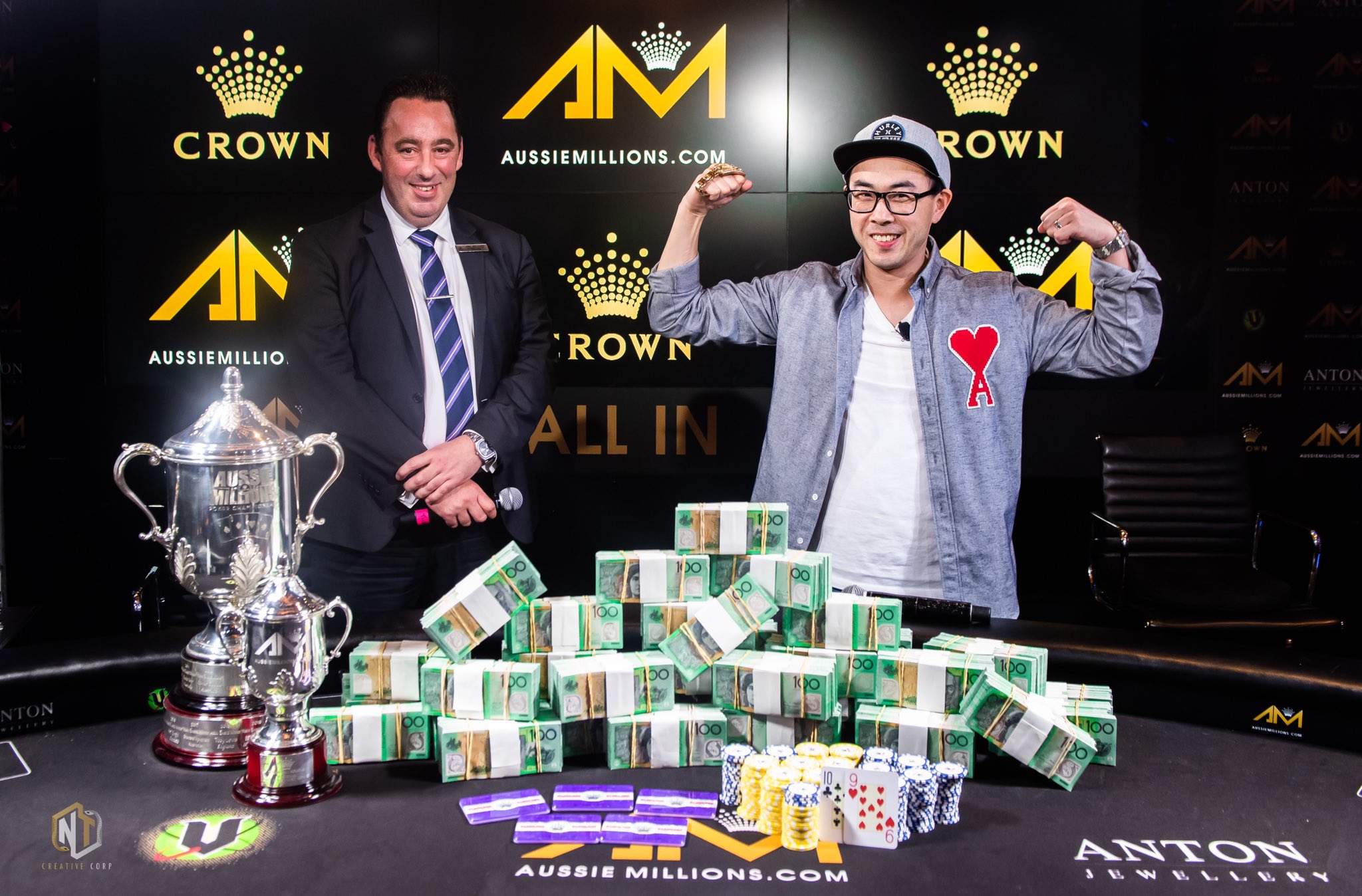 Heading into the Jan 24. finale, all eyes were on Erik Seidel. By far the most accomplished player at the final table, Seidel started in fourth place, but couldn’t hold his position.

As the action got underway inside Melbourne’s Crown Casino, Nino Ullmann led, but Hoang got the fastest start. Coming out swinging, he secured a double up after just a few rounds.


Making his intentions clear from the start, Hoang got aggressive with A♠K♣. That move paid off as a forth spade on the river gave Hoang a winning runner-runner flush against Wan’s A♣K♦. Now holding 2.6 million chips, Hoang continued his run as Nicolas Malo and Oliver Weis became the first two casualties of the day.

As the field thinned, Seidel was next to fall. Almost 1.5 million chips down on his starting stack, he moved all-in over the top of Wan with A♣T♠.

A call from his opponent holding A♠J♣ left the American in a tough spot. Despite hitting a ten on the flop, Wan made a pair of jacks to scoop the pot and eliminate the second-biggest winner in Crown Casino history.

Next to leave the Aussie Millions finale was Ullmann. After suffering an early setback courtesy of Hoang, the former chip leader never recovered. In the end, T♦7♠ would be his undoing. Pre-flop, Hoang slow-played pocket queens, which allowed Ullman to see a fee flop from the big blind.

The T♣7♦5♥ board gave the German two pair and the lead. Stepping on the gas, Hoang fired out a 300,000-chip bet and Ullman called. The J♦ on the turn elicited a check from Hoang and a bet from Ullmann.

An all-in from Hoang followed and Ullman quickly called. With cards revealed, the 5♦ appeared on the river to give Wan a better two pair and send Ullman to the rail in fourth.

Deal Gets Done for Hoang

With three left, the players agreed to a chop — Wan and Hoang would get $907,196 each, while Gareth Pepper picked up $688,312. For Pepper, that was to be his lot. A failed move with 9♦2♣ sent him to the rail in third, and set up a final showdown between Wan and Hoang.

Heads-up, the two Aussie Millions finalists were evenly stacked. However, Wan gradually edged in front after a prolonged battle. He eventually got the job done with T♣9♥. Calling Hoang’s shove with A♠3♥, the man known locally as Wonky watched as the J♠9♠6♠J♦T♦ gave him the final pot and the title.

With that, another Aussie Millions Main Event was brought to a close. Although it wasn’t quite a record breaker, the level of interest in this year’s AU$10,600/US$7,300 Main Event got the year off to a positive start. With live events around the world attracting strong numbers in 2019, the early signs are that 2020 could be another big year for poker.

Winner is always a winner !!!It is always a pleasure to win a tourney but it is a happiness to win a tourney at such level of buyinns and field with so much pokerpros.My Congratulations for the winner , that was extremely his day cause win AK vs AK with a flush is a good part of luck cause it happens not os often as I think)