Viktor Blom, known online as “Isildur1,” was nowhere to be found this summer during the 2017 World Series of Poker. That’s because he decided to stay in Europe and focus on what he knows best: high-stakes online cash games. 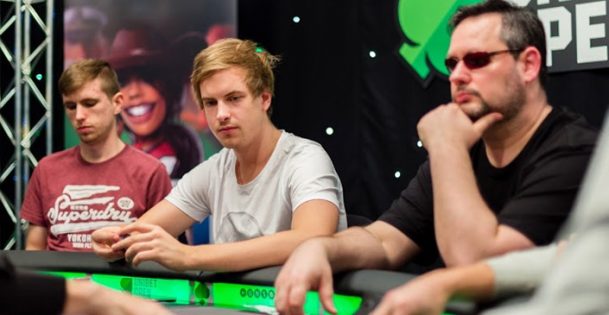 Viktor Blom (seen here in 2015 at the Aspers Unibet Open in London) skipped playing live this summer in order to focus on the high-stakes online cash games. It’s proved a profitable decision for the Swede. (Image: Unibet)

And on Monday night, it paid off in spades, as he won nearly half-a-million dollars in just a day.

According to HighStakesDB, which tracks the online nosebleed games, Blom kicked things off by winning $155,300 off of “donthnrmepls” after 160 minutes at the $1,000/$2,000 2-7 Triple Draw tables. Winning nearly $1,000 a minute was a pretty decent way to start the day, but it wasn’t all smooth sailing after that.

Blom lost just $3,6000 to Alexander “joiso” Kostritsyn at the fixed-limit Omaha 8-or-better tables before taking a two-and-a-half-hour break. When he came back, he engaged in a four-hour heads-up match against “Ravenswood13,” in which it’s estimated Blom lost another $40,000.

Next up was a stint at the $200/$400 pot-limit Omaha tables against Russia’s Timofey “Trueteller” Kuznetsov, who has also been having himself a nice year. It was in this match that Blom, who took his opponent for $80,000, won the biggest pot of the day.

Kuznetsov slowed down with a check but still called when Blom, who improved to a full house, bet $12,800. When the 9♦ completed the board on the river, Kuznetsov checked again and then paid off Blom after the Swede shoved his last $39,652.

Meanwhile, tracking shows Blom won $490,000 for the day. That put him up $1.9 million for the year to date (most of it has come in the past two months), and bumped him to $3.4 million in lifetime profits on PokerStars.

Earlier this month, CardsChat broke down how Viktor Blom became June’s biggest online winner, but it doesn’t look like he’ll finish with that distinction in July. He ended up giving back some of his winnings in back-to-back losing days on Tuesday and Wednesday.

As of July 25, three players sit in front of Blom with “RaúlGonzalez” primed to finish as the month’s biggest winner with $383,515 (65 sessions/10,947) in profit. However, there are still five days of play left in July, and things could certainly swing back in Blom’s favor.