Sang Liu broke a cardinal rule of poker: never celebrate until a hand is complete. He made that fatal error heads-up in the WSOP Colossus, after getting all-in on the flop with the best hand and the biggest stack — only to end up the recipient of what will surely prove to be one of the more memorable bad beats of the 2018 World Series of Poker … a moment of anti-glory captured on video, no less, for all of us to see. 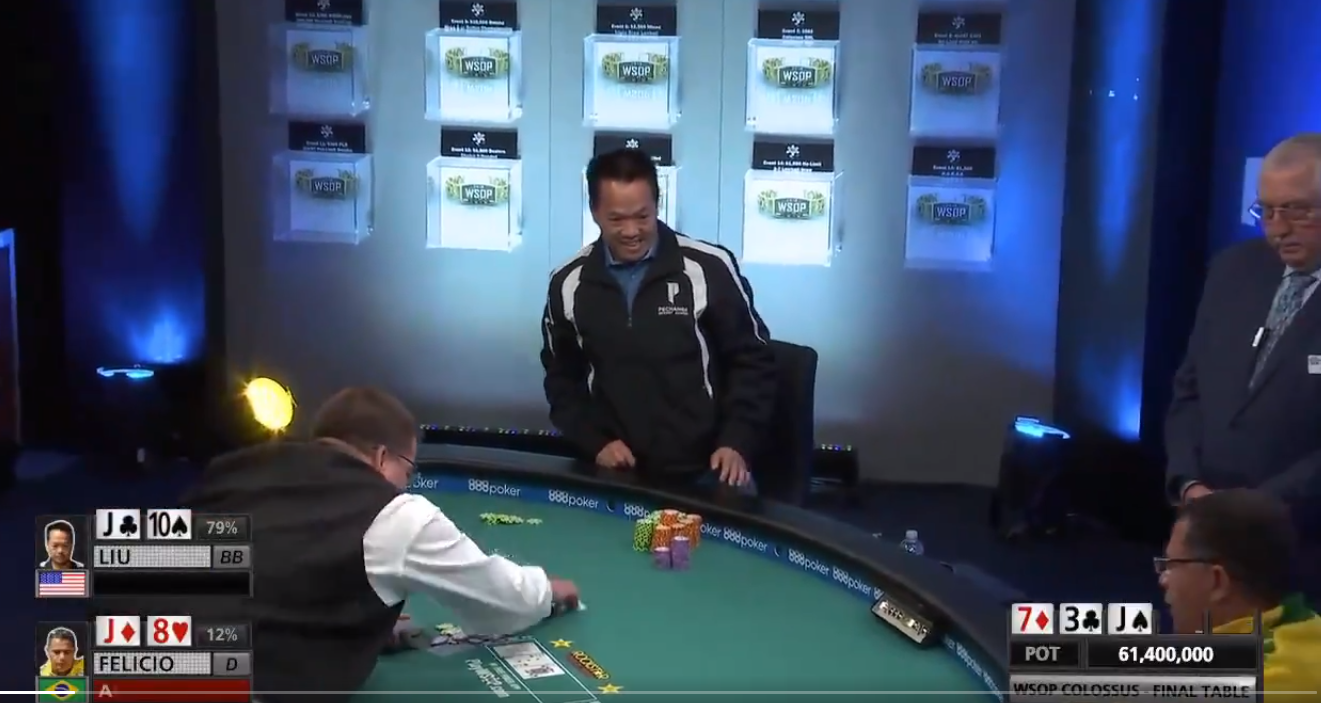 Sang Liu celebrated prematurely, assuming he had already won the WSOP Colossus, but a sick river card cost him the victory. (image: TwitchPoker/Twitter)

Thanks to the WSOP’s partnership with Poker Central and Twitch.tv, the Colossus was one of 30 events with live-streaming final table coverage on Twitch. It was designed to capture moments like this, with a bracelet on the table and one of two men about to win $1 million.

Some might call it karma, but Liu, from Las Vegas, learned a valuable lesson. (Or at least we hope he did.) Unless your opponent is drawing dead, the hand isn’t over. Just ask Jean-Robert Bellande.

Liu got his money all-in with top pair on the flop, and was more than thrilled to discover his J♣10♠ had opponent Roberly Felicio’s J♦8♥ dominated. All he had to do was fade three outs twice, and the dream would be complete — turning is $565 buy-in into $1 million.

Liu proceeded to dance around the table celebrating the 7♦ 3♣ J♠ on the board as if he had just won the bracelet. He would spike his jacket on the floor like a football, which he followed with screams of joy when a harmless K♣ fell on the turn. But, as the Atlanta Falcons learned in the 2017 Super Bowl, it’s not over until it’s over.

The three-outer 8♦ on the river left Liu at about a 15:1 chip disadvantage. A few hands later, Felicio won the Colossus bracelet — and the $1 million — and the premature celebrator had to settle for 2nd place and $500,000. A heck of a consolation prize, sure, but also a half-million reminder of what painfully slipped through his hands at the 2018 WSOP.

Not surprisingly, poker players on social media seemed to delight in Liu’s misfortune. Commenter @MIKMAQSOLDIER on Twitter called it “pure awesomeness,” while guys like @ZacWoodbridge) acknowledged a more spiritual component to the bad beat: “he got smite by poker Jesus for committing that sin,” he said.

But perhaps poker fan Kevin Tatum summed it up best, when he tweeted, “I’d feel bad for that guy if I didn’t want to punch him in the face.”

I don’t blame the guy.I’d be on the highest high a man could get at that stage in a tournament heck yea i’d celebrate BUT he was disrespectful to the other player in the game and NLH itself. Anything can hit and NLH is famous for its beats.

Yea my video finally loaded. He was beyond disrespectful. Skipping off the table etc. He deserved it IMO.