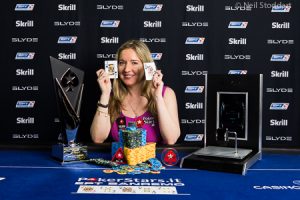 It was all happiness and history for Victoria Coren Mitchell at EPT Sanremo this weekend. (Image: Neil Stoddart for PokerStars Blog)

Victoria Coren Mitchell is no stranger to making history and standing out from the crowd. She won the EPT London Main Event in 2006, becoming the first woman to win an EPT Main Event.

In the ten years of the European Poker Tour, not one player has been able to win two Main Event tournaments … until Sunday, April 20, that is. Coren Mitchell not only came back from a short stack multiple times to stay in the game against the odds, but she overcame all obstacles and won the tournament to become the first-ever two-time champion.

The journalist, television personality, film director, author, and poker player captured the €476,100 ($658,208) prize and a SLYDE watch to go with the coveted EPT title.

The EPT was in Sanremo, Italy, for the second-to-last stop of its historic 10th season beginning on April 9. There were 43 events that combined the EPT and Italian Poker Tour action, but the €5K ($6,912) NLHE Main Event began on April 14.

Day 1A brought in 175 entries, but finished with 103 players and Cristian Guerra in the lead. Day 1B added another 381 entries, out of which 226 players survived, with David Yan then in the overall lead.

The second full day of the tournament began with the announcement of the prize pool at €2,480,872 ($3,429,805) for the field of 556 players, who attended from 51 countries. Only 316 players remained at that point, and the number was thinned to 113 that night with Lukas Berglund in the lead. Coren Mitchell was in 39th place of the remaining players.

Day 3 saw the bursting of the money bubble and the last 79 players guaranteed at least €8,434 ($11,660) in cash. Players like Victor Ramdin, Roberto Romanello, Johnny Lodden, and Dominik Nitsche cashed before play stopped with 39 left. Raul Mestre was in the lead and Coren Mitchell was in 16th place in the chip counts.

Day 4 played down to 16 players after names like Olivier Busquet and Rocco Palumbo exited. Jordan Westmorland was atop the shortened leaderboard, and Coren Mitchell was in 12th place.

Day 5 pushed out players like Alex Kravchenko and Stephen Chidwick, and it was none other than Coren Mitchell who eliminated Jorma Nuutinen in ninth place for €451,930 ($624,793) to set the final table.

From Worst to First

The final table began with Coren Mitchell on the shortest stack with 910K, while Jordan Westmorland held the lead with 3.33 million chips. Giocomo Fundaro was in second with 3.1 million, followed in order by Andreas Goeller, Andrea Benelli, Emmanuel Pariset, Andrija Martic, and Bruno Stefanelli.

Pariset was the first to go from action, while Coren Mitchell found her double-up opportunity through Goeller. Benelli then took over the lead in the tournament after eliminating Martic. Westmorland stepped in to send Stefanelli out in sixth place, and Benelli busted Goeller next.

Westmorland was back in first place and Coren Mitchell back in last place. Benelli took several big hits from Westmorland before being eliminated by Fundaro. Meanwhile, Coren Mitchell stayed alive with a double, but remained short. The three finalists played on as Mitchell caught up with some big hands, and a big hand that she won from Fundaro put her in second place of the three. Soon after, she took another hand to soar into the chip lead. Westmorland was then the victim of Coren Mitchell and left in third place.

Although poker is a male dominated sport, there can be no boubt that women poker players are just as good, and sometimes better.
Well played Victoria and well done.