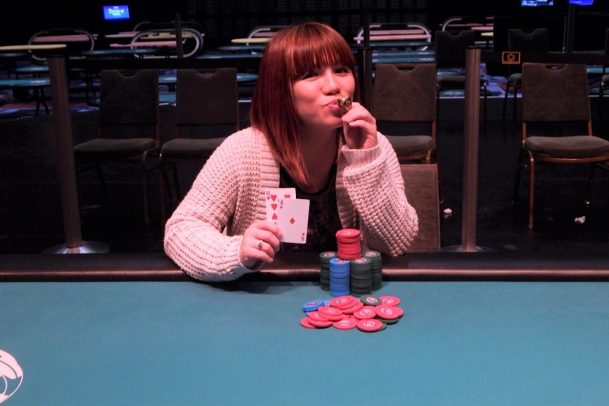 Vanessa Truong now has a shiny gold ring to impress her nail customers with after coming out on top of a 1,164-entry field to win the WSOP Circuit Harrah’s Cherokee Main Event for $318,646. (Image: WSOP)

Truong, who immigrated to the United States in 1989, didn’t have an easy journey in the tournament, at least not at first. According to her, she was card dead most of Day 1, but managed to bag 90,000 chips anyway. On Day 2, she caught fire and finished with a top-five stack. On the third and final day, she went up and down, before making the final table and steamrolling the competition.

Bierra tabled the 8♣6♣ for a pair of sixes, and he needed help, as Truong held a pair of jacks with the A♥J♦. The J♣ river improved Truong to trips, and Bierria was the first final table casualty.

The 6♣6♦2♦ flop gave Pearlman a flush draw, but he missed as the Q♥ bricked on the turn followed by the Q♣ on the river. Pearlman had to settle for second place and a $196,809 consolation prize.

Truong, who secured her first-ever tournament cash and a seat into the season-ending Global Championship, wasn’t the only winner at the WSOP Circuit Harrah’s Cherokee stop. In fact, she was just one of a dozen ring winners.

Among the other players to capture a ring was Jessie Bryant, who topped a field of 595 entries to win Event #3: $580 No-Limit Hold’em Re-Entry for $62,476. Bryant, who learned to play poker while deployed in Iraq, had been quiet since winning his third ring back in 2012, but his fortunes seemed to have turned around with his latest victpry.

To close out the stop, Cody Pack bested a field of 373 players to win Event #12: $365 No-Limit Hold’em for $24,622 and his fifth gold ring. It marked his third victory during a WSOP Circuit stop at Harrah’s Cherokee.

Just two stops remain in the current WSOP Circuit season. The next stop will run from April 27 through May 8 at Horseshoe Baltimore, and that will be followed by the season finale at Harrah’s New Orleans from May 11-22.

Here’s a look at all those who captured rings at the stop: