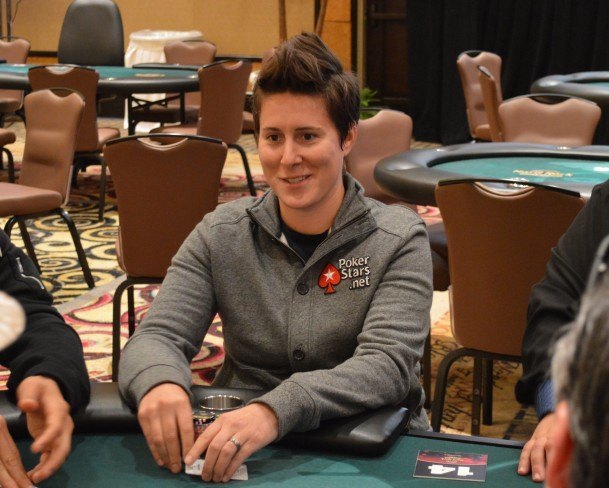 Vanessa Selbst survived a table of famous pro poker players before beating actor Kevin Pollak to win $1 million in the Super High Roller Celebrity Shootout. The event, which took place earlier this summer, has been airing on Wednesday nights on the NBC Sports Network.

The tournament was a small invitational event, one that featured two tables. The first was comprised entirely of famous professional poker players, and the other made up of Hollywood celebrities.

Each table played down to a winner, with the two champions playing a heads-up, best-of-three match for $1 million.

At the celebrity table, five of the most popular poker-playing comedians and actors were gathered together: along with Pollak, there was Hank Azaria, Don Cheadle, Brad Garrett, and Norm Macdonald. Meanwhile, over at the pro table, Selbst had to do battle with a murderer’s row that included Doyle Brunson, Antonio Esfandiari, Daniel Negreanu, and Phil Hellmuth; but of course, she was well up to the task.

The winner of the tournament wasn’t revealed until this Wednesday, when viewers were able to watch the two victors go face-to-face in a final showdown. Even Pollak is likely to admit that Selbst was a big favorite in that particular heads-up contest, and sure enough, the former number one player on the Global Poker Index took down the title and the prize money.

The tournament was organized by Poker Central, the 24/7 television network dedicated to poker that is expected to launch later this year. According to Poker Central CEO Clint Stinchcomb, Selbst was the perfect winner for a celebrity event, one that can teach viewers a lot about the poker world.

“Vanessa is a great example of how fascinating poker players are,” Stinchcomb said. “The stories behind the players are just as interesting as their play. Poker’s popularity, with players and fans alike, crosses all ages and demographics.”

Before her million-dollar win, Selbst was already one of the world’s most successful poker players. She is the winningest female poker player of all time in tournament play, having collected more than $10.6 million in live earnings (before the Celebrity Shootout), and currently ranks 21st on the overall all-time money list.

Selbst is known for more than just her poker playing, however. A graduate of Yale Law School, she recently turned her focus back to passing the bar exam, a goal she accomplished earlier this year.

Selbst is also the founder of Venture Justice, an organization that funds projects related to a variety of social justice causes. According to the organizers of the Celebrity Shootout, some of Selbst’s winnings from the event are going towards that foundation.

Those goals will also be served by Blinds & Justice, a charity event organized by Selbst being held on September 29 in New York City. That tournament will benefit the Urban Justice Center, a group that provides legal service and advocacy for many of the city’s most vulnerable residents.

For those looking for more televised poker to watch this summer, the Celebrity High Roller was only the prelude for the $500,000 Super High Roller Bowl, which will also be airing on the NBC Sports Network starting later this month. That tournament, held in early July, attracted 43 entrants and was won by Brian Rast, who took home over $7.5 million for first place.

Great job V, I watched the whole series on tv and it was a great run, especially when you were heads up with Kevin (who played pretty darn well). You are truly one of the best in the game!