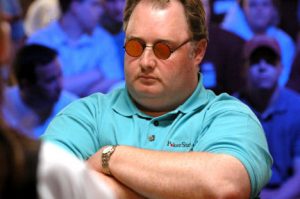 Online poker regulation in the US takes a few small steps forward thanks to PokerStars and Greg Raymer. (Image: flipchip / LasVegasVegas.com)

PokerStars made a fair amount of noise about its recent visit to California before the event; however, a few days on and there has been relatively little reaction to the visit.

In an effort to help progress regulatory talks within the Golden State, PokerStars flew two of its leading pros, Daniel Negreanu and Jason Somerville, out to Sacramento to enlighten politicians and media members.

In addition to presenting the decision makers with some facts about the online poker industry, Negreanu and Somerville took part in a series of play money games with those in attendance.

Overall, the idea was positive and something similar to the one utilized by the Poker Players Alliance (PPA) back in March on Capitol Hill; however, it appears the reaction to the demonstration was mixed.

Although reports from the frontline have been scant, Negreanu did tweet his “read” on the situation. Suggesting that everyone is largely onboard with regulated iGaming, Negreanu appeared pleased with how the session went.

“Enjoying Sacramento. Read is that people on both sides of the aisle want online poker regulated in California. They are ‘getting it’ I think,” tweeted Negreanu. However, reading between the lines, there’s an undeniable hint of uncertainty behind Negreanu’s tweet.

As it stands, there are differing opinions between various forces in California, including tribal leaders and it could be this divide that’s caused Negreanu to offer something of a reserved review of the situation.

In other regulatory news, the PPA received a boost this week after Greg Raymer announced that he is rejoining the organization.

Back in 2013 the 2004 WSOP Main Event champion left the PPA after he was accused of having dealings with a prostitute.

Not wanting to distract from the organization’s efforts, Raymer handing in his resignation which was duly accepted by the PPA’s Executive Director, John Pappas.

“Earlier today, members of the Board of Directors of the Poker Players Alliance had a conversation with Board member Greg Raymer.

However, two years after leaving, Raymer is now back onboard to help the PPA take on the likes of Sheldon Adelson; something Rich Muny, the PPA’s VP of Player Relations, welcomed.

“We at PPA are proud to welcome 2004 WSOP Main Event Champion Greg Raymer back to the PPA Board of Directors.

Greg has been a tremendous advocate for the game and for the right to play it in all its forms (online, cardrooms, casino poker rooms, home games, etc.) for over a decade.”

PokerStars’ push in California may not have helped unite a divided state, but the visit certainly wouldn’t have hurt the industry’s chances of being regulated.

In fact, in between this demonstration and the recent move by Greg Raymer, iGaming’s chances of legislation in the US aren’t looking as bad as they once were.

Raymer will be providing free hookers for everyone at the PPA meetings.