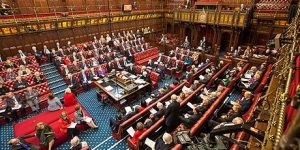 The House of Lords has given their thumbs up to a controversial UK gambling tax bill; the bill now awaits its fate in the House of Commons (Image: parliament.uk)

The UK Gambling (Licensing and Advertising) Bill has been the subject of much disagreement in the online gambling community. The most serious point of contention is the associated Point-of-Consumption (POC) tax, which will levy a 15 percent tax on foreign-based operators in order to cater to UK customers and require a license from the UK Gambling Commission. Groups like the Remote Gambling Association (RGA) have staunchly opposed that particular amendment, but the UK government fully intends to push forward.

Last week, the House of Lords gave its final approval to the bill. It now requires an affirmative vote from the House of Commons, which is expected to happen before Parliament takes a summer break. That would allow the Gambling (Licensing and Advertising) Bill to go into effect as soon as the summer months, and UK Chancellor of the Exchequer George Osborne said the Point-of-Consumption (POC) tax will be effective December 1, 2014.

The UK Gambling (Licensing and Advertising) Bill has a number of amendments, including a horse-racing levy and the POC tax. There was an advertising amendment to introduce stricter restrictions on gambling ads, but that was rejected by the House of Lords and will be introduced separately at a later date.

The POC tax is the most controversial part of the bill. In an attempt to increase revenues and capitalize on the large number of online gamblers based in the UK, the nation’s Treasury will implement a 15 percent tax on gross profits made by gambling operators based offshore, but that cater to UK customers. The government wants to induce companies to base their companies in the UK, and it claims that licensed and proper tax-paying companies will thrive.

The detractors are many, among them the government of Gibraltar, a British territory. As it stands, Gibraltar is a hub for gambling businesses around the world, many of whom base their companies on the island. Gibraltar leaders have expressed dismay at the possibility of losing many business residents to the UK, despite those like William Hill vowing to remain on Gibraltar and not relocate to the UK. Most companies have yet to weigh in on the most economically beneficial decisions, however.

Some in the UK have been vocal about fears that the 15 percent tax is simply too high, saying many companies will not participate. Those that do may be forced to raise rake in order to cover costs, which may drive customers to unlicensed offshore-based companies for their online gambling and betting needs. In addition, the cost of monitoring the sites, assessing fees, and attempting to blacklist advertisements and access to unlicensed businesses may be excessive.

The Remote Gambling Association has been very vocal in its opposition to the POC tax. The RGA’s chief executive, Clive Hawkswood, noted in past objections that “any rate above 10 percent GPT is not sustainable in the long-term.” He says that the UK tax burden is “unreasonably heavy” and creates difficulties in competing in the larger marketplace.

The RGA issued a press release after the House of Lords vote last week to strongly condemn the POC tax once again. The three primary dangers specified were that firms will be unable to recover the cost of the tax, forcing them out of business or to the gray market; that many UK customers will use offshore operators for lower-priced products; and that the consequences will be difficult to reverse, even if the government reduces the tax at a later date.