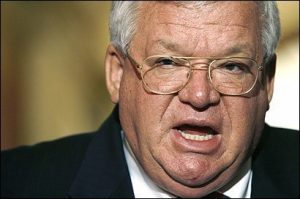 Former speaker Dennis Hastert was a major proponent of the push to ban online poker in the US. He is accused of paying hush money to suppress a decades old abuse scandal. (Image: dailystormer.com)

Dennis Hastert, the US politician at the center of a financial and sex abuse scandal was a bullish proponent of Unlawful Internet Gambling Enforcement Act, the 2006 law that criminalized online poker in America.

Back in 2006 Hastert was also the author of the American Values Agenda, which included the full prohibition of online gambling via a rewriting of the Wire Act among its aims and railed against the legalization of gay marriage.

“Through this agenda, we will work to protect the faith of our people, the sanctity of life and freedoms outlined by our founding fathers,” claimed Hastert at the time, although it should be noted that history does not record the Founding Fathers’ stance on online gambling.

The former US House of Representatives Speaker is due to appear in a Chicago courtroom on Thursday to answer federal charges that he hid $3.5 million in hush money, paid to an unnamed individual, to cover up allegations of sexual misconduct.

The individual is alleged to have been a male student at the Illinois High school where Hastert was once a teacher and coach.

Before he embarked on a political career, Hastert was a teacher at Yorkville High School in Chicago for 16 years.

Lied to FBI about Payments

Illinois lawmakers have scrapped a postponed plan to spend $500,000 building a statue in Springfield honoring Hastert.

According to the indictment, Hastert met with the former student, known only as “Individual A” several times in 2010 and agreed to pay the sum as “compensation.”

The former Republican lawmaker is charged with structuring the withdrawal of $1.7 million in cash from various bank accounts over several years in order to avoid the requirement that banks report cash transactions over $10,000.

He is also charged with lying to the FBI about these withdrawals.

According to court documents, he claimed he withdrew the money because he did not trust banks and that the cash was still in his possession.

Hastert reportedly made millions from land deals during his time in Congress.

On his retirement in 2008 he became a lobbyist with the firm Dickstein Shapiro, petitioning his former Congressional colleagues on behalf of companies from the tobacco and energy industries, as well as for the Turkish government.

Hastert famously led the impeachment of Bill Clinton for lying under oath about his affair with Monica Lewinsky under the premise that no one is above the law.

Meanwhile, further controversy erupted when it emerged that the federal judge assigned to the case had contributed to Hastert’s congressional campaigns on at least two occasions, in 2002 and 2004.

It is not yet known whether U.S. District Judge Thomas Durkin will stand down as a consequence of the revelation.