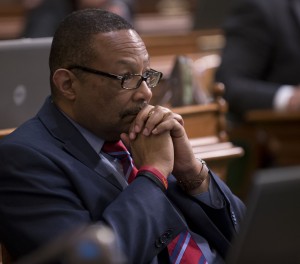 California has been on the watch list for online poker legalization for several years. Some analysts predicted little to no activity in 2014 due to the November elections, but something happened just before the deadline of the state legislative session: two online poker bills were introduced.

State Senator Lou Correa introduced SB 1366, which had no sponsors in the legislature at the time of the proposal, but is supported by the San Manual Band of Mission Indians. State Assemblyman Reggie Jones-Sawyer simultaneously put forward AB 2291, which is supported by numerous Indian tribes in the state, including the Pechanga Band of Luiseno Indians.

There are some overlapping tenets in the two proposals, including that both are confined to online poker only, and both will allow the state’s card clubs and tribal casinos to participate as operators, though racetracks are not included. They are both also classified as urgency statutes, meaning they require a two-thirds majority to pass and would take effect immediately upon passage, and regulation would be controlled by the California Gambling Control Commission.

This bill will provide regulation for Internet poker games on an intrastate level. The CGCC would be required to adopt regulations within 270 days of passage.

Operators would be able to apply for a 10-year non-transferable license to operate a website for players within the borders of California. Said license must automatically be renewed every 10 years upon application. Each licensee would have to pay a one-time fee of $5 million, which would then be credited against quarterly fees equivalent to five percent of gross gaming revenue proceeds from that licensee. Taxable profits will go to the Internet Poker fund for the benefit of social programs, as well as to help prevent illegal offshore Internet gambling operators from catering to California residents.

Applicants must have at least five years of experience offering gaming in California, and includes only card clubs and federally recognized Indian tribes within the state. This includes all employees, website servers, and other pertinent associated companies and workers to be located within the borders of the state, with only a few exceptions.

The intrastate clause prohibits California from entering into any interstate liquidity agreements and automatically opts out of any federal online poker law. Companies within the state would be allowed to form partnerships, however. And local governments will not be able to opt out or ban Internet poker.

All sites licensed, approved, and prepared to offer online poker would go live on January 1, 2015, though that date could be changed by the CGCC.

Also known as the Internet Poker Consumer Protection Act of 2014, this bill (a reintroduction of what was formerly SB 678) will authorize intrastate Internet poker websites for players within California with an option for interstate agreements with other states. The GCC would have to adopt its regulations within 120 days after the bill’s effective date.

Operators would be able to apply for initial licenses with renewal options. The application fee would be required to cover all costs associated with the license, though federally recognized Indian tribes would have separate and to-be-determined license fees and requirements. The license fee would be $10 million and credited against fees imposed on gross gaming proceeds. The regulatory fees would be deposited into the Internet Poker Fund, which would be subject to annual appropriation by the state legislature. Reports of policy goals and requirements would be subject to the GCGG rules in conjunction with the Treasurer, Franchise Tax Board, and legislature.

License applicants will be able to operate in more than one state, though site owners, operations and employees will have to be based in California. Bank accounts and records must also be kept in the state. Operators must also have three years of experience in casino operations to qualify for a license. Licenses will be issued for 10-year periods and subject to a 10 percent tax rate.

The bill will ban all Internet cafes, and will prohibit local governments from regulating the Internet poker industry in any way. In addition, players will be prohibited from gambling on any unregulated sites, or risk having all funds seized by state officials.

Operators will be allowed to operate through network skins and partnerships, though all sites must obtain proper licenses from the state. And affiliates are permitted to operate within the regulated system.

Players will be subject to state taxes. Those who win more than 300 times the buy-in of the game in which a player wins $600 or more will have five percent of that money withheld by the operators for state tax purposes. There is no offset for player losses.

looks like this bill is better than that California 8 something.