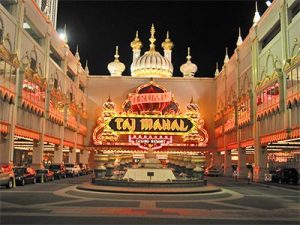 The closure of the Trump Taj Mahal in Atlantic City would put pressure on Internet gambling companies to find new partners, including Betfair and Ultimate Gaming. (Image: CityAtlantic.com)

With the Trump Taj Mahal facing a possible mid-November closing, yet another Atlantic City casino joins the ranks of so many that have been closing left and right this year. With four already shut down or scheduled to close by the end of September, it’s been a bleak year by anyone’s standards.

But if you thought the bleeding had stopped, that ended this week as parent company Trump Entertainment Resorts filed for bankruptcy protection and announced that they might have to close the Trump Taj Mahal Casino Resort. It’s a move that would have significant repercussions on several fronts, including the online poker market in New Jersey.

The Trump Plaza Casino is already scheduled to close on September 16, while the Taj Mahal would be likely to close before Thanksgiving, barring some drastic cuts to the venue’s expenses. Those closures could put a couple of online gambling operators in a tough spot, as they may not have obvious options for new partners to work with as more casinos close.

First, there’s the situation for Betfair, which had been partnered with the Trump Plaza. Betfair currently runs a modestly successful online casino, though their poker room has struggled to generate even a small amount of revenue. Betfair had received permission to host their servers at the Taj Mahal, making them a likely home for the software firm. But with the expected closure of the Taj, Betfair may have a difficult time finding another Atlantic City casino to partner with.

Perhaps more relevantly for the online poker marketplace, Ultimate Gaming is currently partnered with the Taj Mahal. While Ultimate Poker hasn’t been particularly successful in the New Jersey market, their name recognition and popular Nevada poker room could still make them a player in the future, if they can find a way to stay in the market. Ultimate Gaming also boasts a casino site that, like Betfair’s, has generated a small but significant amount of revenue.

But the problem for both of these companies is that the seven casinos that are likely to stay in business all have partnerships established for online gambling. That doesn’t necessarily mean that these casinos can’t also partner with Betfair or Ultimate (it’s likely that many of these arrangements aren’t exclusive partnerships, and casinos are allowed to have multiple online gaming partners), but it could complicate matters if casinos don’t want to risk upsetting their existing relationships with online gambling companies.

According to Trump Entertainment, the Taj Mahal would only remain open if union workers at the casino were willing to make significant concessions. But workers took umbrage to that concept, saying that the problems at the casino go far beyond anything labor could fix.

“If our members were to work for minimum wage with no benefits, it wouldn’t be enough to keep this property in the hands of its current owners for a year,” said Bob McDevit, president of Unite Here Local 54. “Fundamental to Trump’s problems is the fact that the company had almost $300 million in debt.”

But despite these issues, the planned closure of the Trump Taj Mahal still came as a surprise to many analysts, who felt that the casino had a chance to be profitable.

“The property is almost breaking even and will benefit from the closure of Trump Plaza,” said Alex Bumazhny of Fitch Ratings.