Trump Entertainment Resorts to Settle with Betfair and Ultimate Poker 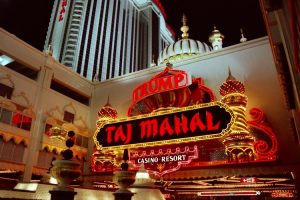 Betfair and Ultimate Gaming have come to a settlement with Trump Entertainment Resorts over their respective business dealings in New Jersey. (Image: mikelynaugh.com)

Trump Entertainment Resorts (TER) will settle with former New Jersey business partners Betfair and Ultimate Gaming. The now bankrupt casino operator had a hearing delayed to this week to find out the fate of the ill-fated Trump Taj Mahal, its last remaining Atlantic City property. The agreements with Trump’s online business associates determined which party will receive funds remaining in accounts that were jointly held.

Agreement Signals the End for Trump

TER had grand designs for leading the way in online gaming and poker activities in the state of New Jersey. But its entire business enterprise in the Garden State has just about evaporated at this point.

The gaming operator, which has been a staple of Atlantic City for decades, finalized agreements with its two online partners, Betfair and Ultimate Gaming, to figure out who will get the remaining money in accounts jointly held between the groups. This purportedly allows Trump Entertainment Resorts to receive $1.4 million that will be used to pay off expenses, or invest into its own future operations.

According to industry reports, the terms of the settlement allow Betfair to use any data jointly owned by each company for commercial purposes. The accord also calls for Betfair to have uncontested ownership over its own customer data. This helps the online gaming company retain business in the state, as it has recently signed a new deal to operate with Golden Nugget Atlantic City.

Ultimate Gaming, which partnered with Trump Taj Mahal,  left New Jersey recently and has begun refunding all player accounts. The company also pulled out of the Nevada poker market, meaning that it looks like the industry has seen the last of Ultimate Gaming.

Court Cases Not Over for Betfair

Even though Betfair has agreed to this settlement, more court dates are in order because they are pursuing a separate claim for $700,000 from Trump. Back in September 2014, Betfair had a court order approving its limited involvement in TER’s bankruptcy proceedings ratified by the New Jersey Division of Gaming Enforcement. The action was spurred by a “lack of cooperation” by Trump in its online operations.

Fate of the Taj Mahal Undetermined

On December 11, Trump Entertainment’s bankruptcy case will have a hearing to determine what will happened to the Trump Taj Mahal casino made famous in poker circles for its appearance in the classic movie Rounders. The casino was set to close and shut its doors for good just one day later on December 12, but that date has been pushed back to December 20 in an effort to enhance settlement negotiations. Trump’s other site, the Plaza, already shut down back in September.

Ongoing negotiations with main creditor Carl Icahn and state officials continue, but the Chairman’s Tower, a hotel within the Taj Mahal, closed last week. Icahn has stated that he would be open to acquiring the casino if he can wipe away its $286 million in debt that he owns, plus receive concessions from casino workers for healthcare and pension plans, a request that has not been well-received by the casino workers’ union.