The £1,050,000 buy-in Triton Million poker tournament in London is down to its eight-player final table. Fans watching on Saturday’s live stream will see a nice mix of professional and recreational poker players. 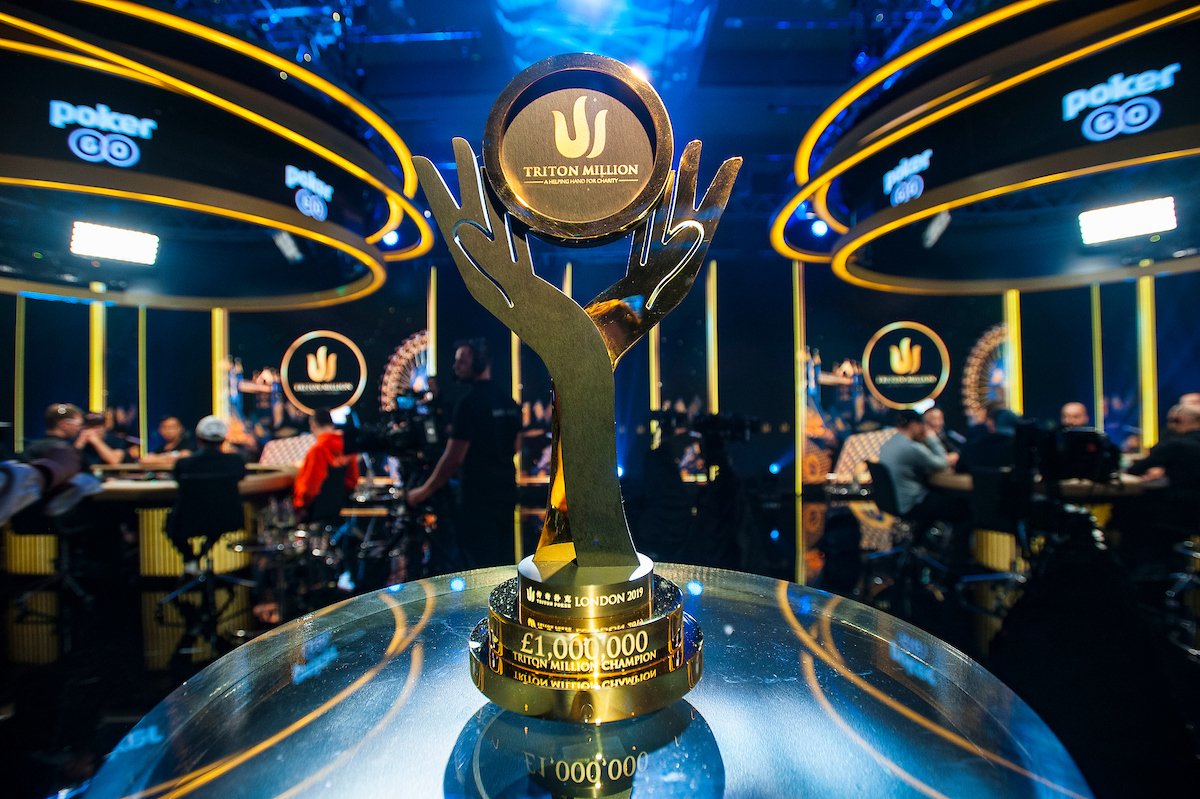 Only eight players still have a shot at this shiny trophy. (Image: Twitter)

In just two days time, the most expensive buy-in tournament in history has dwindled down from 54 to eight players. And although the money bubble has already burst, the real pressure will be on during the final table which begins at 1 pm BST (5 am PT). All the action will be live-streamed at Triton-Series.com.

With the potential to win £19 million at stake, expect a high-pressure final table. Even the wealthy businessmen such as Bill Perkins can admit that’s an almost unheard of prize for a poker game.

Day Two on Friday was action-packed from start to finish. The session began with 36 players still hoping to get their hands on the largest prize in poker history ($23 million). But just eight of them advanced to Day Three, and only 11 of whom will leave with money.

Igor Kurganov, like everyone else in the tournament, bought in for £1,050,000. But he fell just one spot short of finishing in the money shortly after losing a huge pot with pocket tens against Bill Perkins’ pocket jacks.

Bryn Kenney also made his presence known at the Triton Million on Friday. He sucked out with a weaker ace to bust Triton ambassador Jason Koon. And then later lost most of those chips when Chin Wei Lim accurately called Kenney’s huge river bet with just a small pair of sixes on a wet board. Lim was up against a missed flush draw as he correctly read.

The remaining eight players are playing for the $23 million first place prize. But for Stephen Chidwick, Bryn Kenney, and Dan Smith, they’re also playing for a shot to overtake Justin Bonomo, who has $45 million in career earnings, as poker’s all-time winningest tournament player.

Chidwick will start the final table with 82 big blinds, good for second in chips. While Smith has the second shortest stack at 20 big blinds. Kenney is also in decent shape with 46 bigs.

Bill Perkins, who took the chip lead into Day Two, has the smallest stack at 17 big blinds. Vivek Rajkumar, who Tom Dwan referred to as a “luckbox” on Twitter, has 152 big blinds and a massive chip lead.

Each of these eight gentlemen have a guaranteed £1,400,000 payday. But all eyes are on the £19 million championship prize. Or, at least the £10 million that is awarded to the runner-up.

Make sure you tune in to the final table beginning at 1 pm BST on Saturday. By the time the session concludes, we could have a new all-time winningest poker tournament player.

Pretty weird pay-out.
The top prizes are a bit too high, I would give a little bit more to place eight.

That’s how it works in mtts with tiny fields. Should probably only pay 5 spots maximum. That’s close to 10% of the pool.