Triton London has become the latest casualty of COVID-19 restrictions in the UK, meaning the high-stakes poker tour won’t return until 2021. 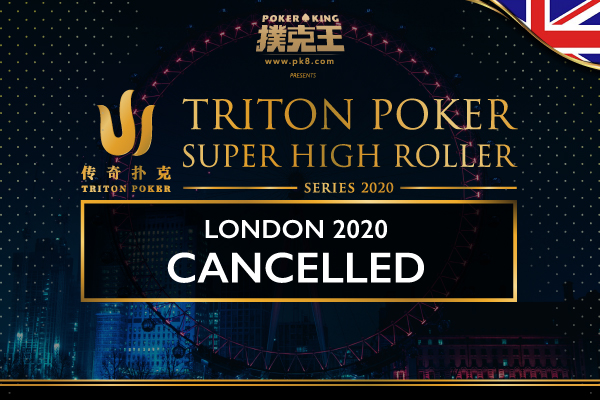 There will be no high-stakes Triton Poker event for British punters this year. Thanks, COVID-19. (Image: Triton Poker)

Though casinos across Europe are reopening, their British counterparts are still in a state of limbo. That despite the fact Prime Minister Boris Johnson recently authorized the reopening of betting shops, bingo halls, and other entertainment venues.

With no word on when British casinos can resume operations, Triton has canceled the London leg of its tour.

The festival was due to take place between July 29 and August 13. In a message posted on Triton’s website, the organizers said the decision to cancel is due to ongoing safety concerns.

“It’s vitally important to us that we provide you with a safe environment, not only to play the game you love, but to travel to and from the incredible locations that host Triton events,” reads the press release.

As such, the final leg of 2020 has been canceled. The change of plan means poker’s richest event has also been postponed. Previously, Triton canceled it’s Montenegro super high roller event scheduled for May 8 – 22, also because of COVID-19.

When Triton held its first event in London last year, it marked the occasion with a £1,050,000/$1,305,000 buy-in charity event. In addition to boasting the largest entry fee in history, it was part of a record-breaking series that saw more than $100 million in prize money won over the course of eight tournaments.

Although Triton hadn’t published the schedule for this year’s festival, it promised to bring the tour’s “philanthropic nature” to the fore. The implication was that, alongside the £100,000/$130,000 main event, a super high-stakes charity showdown would take place in London.

European Casinos Back in Action, UK Remains on Lockdown

Those aspirations will have to sit on the back burner for now as UK casinos fight for their right to reopen. COVID-19 infection rates have dropped consistently since May and, with the death rate at just 0.1%, life is slowly returning to normal in Britain.

Even as pubs, hair salons, swimming pools and gyms reopen, casinos are being left in the cold. The lack of clarity has irked operators. Michael Dugar, the head of the Betting and Gaming Council, is calling for the government to change its stance as “quickly as possible.”

The British lockdown is compounded by contrasting scenes across Europe. Despite similar or higher national infection rates, governments in Spain and Italy have allowed casinos to reopen. Elsewhere on the continent, casinos in France, Poland, and the Czech Republic are also open.

Germany is still taking a cautious approach with regard to its casinos. Even though it has one of the lowest infection-to-death ratios in Europe, gambling venues remain closed. Somewhat surprisingly, casinos in Sweden are also still shuttered.

Sweden has been against any type of national lockdown since the COVID-19 outbreak started. However, Casino Cosmopol, a subsidiary of state-owned Svenska Spel, has its venues in Stockholm, Gothenburg, Malmo, and Sundsvall under lock and key.

Given the rate of easing in the UK, there is hope casinos will soon be allowed to accept bets. However, for Triton Poker, any changes will come too late for it to go ahead with its final stop of 2020.