Native American Tribes Active in California, Out in Oklahoma 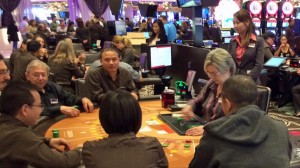 California’s Indian casinos are much more invested in potential Internet gambling opportunities than their counterparts in Oklahoma (Image: nbcbayarea.com)

As Internet gambling has taken hold in some states in America and is being pursued in others, Native American tribes have become more active and interested in the potential benefits of their involvement. Those in states like California have a much larger interest due to the plethora of land-based gambling establishments on reservations, while tribes in other states like Oklahoma are feeling their way around the laws to discover how online gambling may be beneficial to their people.

The recent introduction of two online poker bills in California has brought more Indian tribes together in the process than ever before. Tribal leaders have been instrumental in the drafting and development of the bills themselves, as well as in discussions with legislators to move them forward.

The San Manuel Band of Mission Indians took the lead in supporting SB 1366 with State Senator Lou Correa, who sponsored a nearly identical bill (SB 678) last year. And AB 2291 was introduced by Assemblyman Reggie-Jones-Sawyer, but consists of support from quite a few tribes, such as the Pechanga Band of Luiseno Indians, Barona Band of Mission Indians, and Agua Caliente Band of Cahuilla Indians.

Analysts say that the bills are fairly close together with respect to considerations for tribal interests, and one of the bills is likely to make some progress through the state legislature in 2014. In addition, Rincon Band of Luiseno Indians Chairman Bo Mazzetti believes that California tribes are in agreement on 99 percent of the details of the bills. Another meeting among the tribes is scheduled for this month.

The Cheyenne and Arapaho tribes in Oklahoma seemed to be making progress just a few months ago. An alliance with PokerTribes.com –  and a positive view from legal teams regarding a lawsuit to allow the tribes to offer online gambling to customers outside of the United States – seemed to be moving the progress forward. Much changed in the first few months of 2014, however.

The tribes cut ties with PokerTribes.com, which was a multimillion-dollar website that was to set the stage for the online poker endeavors and tie in with their four land-based casino operations. Some say that the move had to do with incoming Governor Eddie Hamilton, who replaced a number of casino personnel, as well as the state’s Attorney General, all of whom were integral in the success of PokerTribes.com. Without their support, the tribes ditched the project.

Soon after, the legal counsel for the Cheyenne and Arapaho tribes dropped a lawsuit against the United States Department of the Interior. The federal court case was filed in late December 2013 to eliminate obstacles in the pursuit of the online poker project, as the federal government had objected to the revenue-sharing deal between PokerTribes.com and the state of Oklahoma. But reports say Hamilton directed Attorney Richard Grellner to stop pursuing the case, so the case has been dropped.