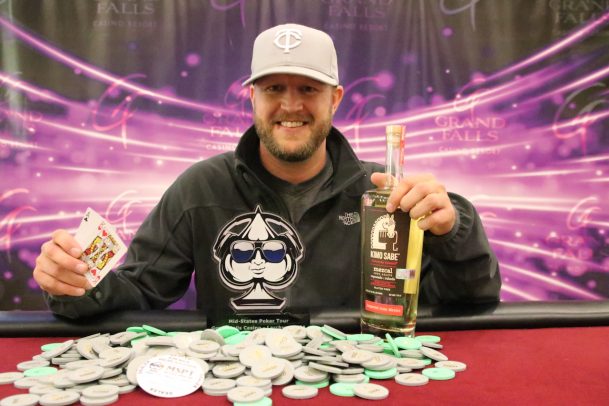 Iowa’s Jason Bender, a regular on the MSPT, has several final tables under his belt, but thus far a title has eluded him. That looked like it was going to change on Sunday when he entered heads-up play with a 4-1 chip lead over Gant.

But thanks to two fortuitous river cards, Gant was able to turn the tables and put Bender on the ropes. In what would be the final hand of the tournament, the blinds were 80,000/160,000/20,000 when Bender got his stack of 3.5 million all in preflop holding the A♥10♥ against the A♣K♥ of Gant. The 2♥5♦8♠ flop didn’t do Bender any favors, and he watched helplessly as the 3♠ blanked on the turn followed by the 6♦ on the river.

Bender, who finished runner-up in the MSPT Grand Casino Mille Lacs last season, once again had to settle for second place. Despite the heartbreak, Bender’s Regional résumé is impressive, with all four of his cashes being final table appearances.

As for Gant, the win marked his first MSPT cash and came a week after he failed to make the money in the MSPT Canterbury Park Main Event. Prior to that score, he had $18,162 in tournament earnings including $8,700 for finishing fifth in the 2017 South Dakota State Poker Championship in early April.

“It feels pretty awesome,” said Gant. “I came in to today short and had to spin it up right away. I got back in the game, made a few hands, and got to the final table. Hands went my way and here we are. It’s been a long time coming, I’m really happy. I’ve been grinding online before they shut us down. I saw a lot of hands before I got this break.”

The turnout marked the largest poker tournament at Grand Falls Casino, which opened in 2008, to date. It marked the sixth time the MSPT has visited the property, though all previous stops were $1,100 Main Events.

Last year, the tournament attracted 187 entrants and saw Fishing Hall of Famer Ted Takasaki top a tough final table to walk away with $52,360. Two other notable winners over the years include Dan Sun, who beat the field of 215 entrants in the inaugural event in 2012 to win $60,486 and MSPT Pro Blake Bohn, who outlasted 200 other entrants to win in August 2014 for $54,607.

“From the dealers on down, everybody was on top of everything,” said Gant, who helps his family ranch and plays baseball on the side. “It was smooth. As far as Grand Falls goes, it’s a great place to play.”