Traffic Down at Full Tilt Since Cash Game Changes 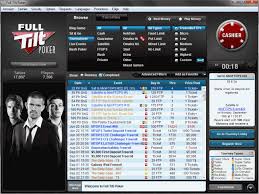 The new Full Tilt lobby does not allow for table selection, and heads-up cash games are no longer available. (Image: Full Tilt/rakeback.com)

When Full Tilt announced the dramatic changes they were making to their cash game offerings last week, there were admissions that it was possible that at least some of the changes would prove to be mistakes.

While it is still far too early to tell what the long term impact of these decisions will be, the early data suggests that there might have been some missteps in how the site altered their cash games.

According to data collected by Poker Industry Pro, cash game traffic at Full Tilt is down about six percent following the changes that went into force last week.

That decline becomes even more pronounced when looking at recent individual days: traffic this Monday is down about 14 percent from the same day last week.

These included the complete elimination of heads-up tables, as well as a change to a seating system that works more like those in live casinos, in which players can choose the game and stakes they want to play at, but not the individual table or seat they prefer.

In a post on the Full Tilt Blog by Managing Director Dominic Mansour, it was acknowledged that while these changes would be beneficial to casual players, they might anger some professionals and other profitable players who relied on seat selection in order to pad their bankrolls.

“We also recognize that in the past, a proportion of players have used extensive table selection to their advantage and that those players might not like these changes,” Mansour wrote. “Their advantage over other players will now be negated and we don’t think that’s a bad thing. Good things happen to those who play and we believe the changes we’re making will see even more good things happening to more players at Full Tilt.”

Small Number of High Volume Players Likely Cause of Drop

It is likely that it is precisely those players who are behind the loss of cash game traffic on Full Tilt.

While only a small percentage of players are negatively impacted by changes like these, that group is also one that heavily multitables in the poker room, making them the driver for a high percentage of cash game traffic.

With that in mind, it may be a very small percentage of players causing the somewhat larger percentage drop in poker room traffic.

That, Poker Industry Pro noted, means that even the 14 percent drop on Monday might well be seen as a good figure for Full Tilt: while attracting new players will take time, it seems as though relatively few players have jumped shipped following the changes.

While it is difficult to say for certain, it seems likely that the complete elimination of heads-up games may have driven away more players than changes to table selection in other ring games.

That possibility was noted almost immediately by Full Tilt officials when the lobby updates were announced.

“It’s not going to be a super popular decision, and it’s absolutely possible we’ve made a mistake,” Full Tilt Poker Room Manager Shyam Markus said on the Two Plus Two forums. “But for now it’s the decision we feel has the best chance of helping to turn around some of the biggest problems we face and return to growing the site.”

I hope the site doesn’t shrink to irrelevance .