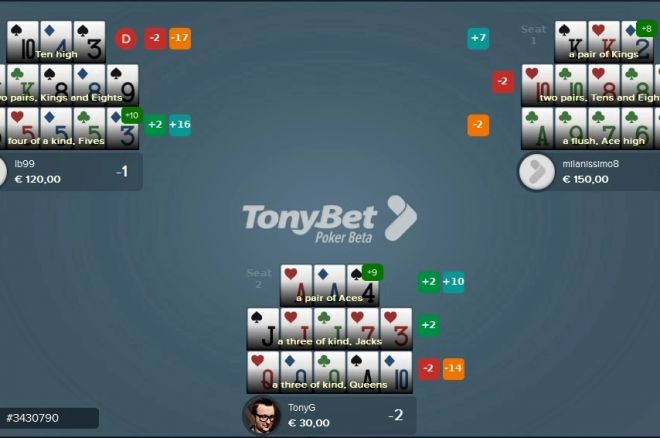 A new TonyBet rakeback system has been implemented, and will cater to the recreational UK and EU poker player.  (Image: TonyBet)

Out with the old TonyBet rakeback system, in with the new. The leading online site has introduced a brand new rakeback program which is geared towards recreational poker players in the EU and UK markets.

That fee per pot may not seem like much, but it does add up over time. In recent months, regulars (professional poker players), have voiced displeasure towards poker sites increasing rakes and eliminating rakeback programs.

TonyBet’s new rakeback system will give a little back to losing players. Here’s how it works. If you lose more than €100 in a day in cash games, the following Monday, 80 percent of the rake you paid in that day will be shipped back to your account.

And fyi, rakeback at TonyBet does not apply to one of its most popular games, Open Face Chinese.

Online poker has suffered in popularity in recent years. The industry isn’t close to matching its pre-Black Friday revenues. Part of the reason is a decreasing number of recreational poker players.

TonyBet’s new rakeback system is geared specifically towards casual players. By implementing this system, the poker site is clearly hoping for an influx of non-pros. 888poker recently came up with new reward programs with the same concept in mind.

Casual players benefit from favorable rakeback programs such as this because they get money back after losing, making it more likely they will continue playing. Once a casual player blows through a bankroll, they usually quit playing.

Pros, of course, don’t benefit from this type of program as much, because they are winning players and won’t receive the full 80 percent rakeback on most days. But some recreational players may be able to “stay in the game” longer due to a higher rakeback program.

Over the past few months, the world’s largest poker site, PokerStars, implemented some changes to its VIP program that didn’t go over well with the pros. The changes were made with the intent of attracting more amateur players and keeping them around longer, too.

Many pros boycotted PokerStars on several occasions in protest of the changes, but the poker site didn’t suffer from the boycott. PokerStars will be eliminating its highest loyalty tier status, Supernova Elite, at the end of this year, and high stakes cash games already no longer receive VPP points.

PokerStars has also made significant changes to its rakeback program, making it more difficult for players to earn a living just off of rakeback.

In the past, a break-even player could actually make a nice profit from rakeback alone. Those days are gone and many aren’t happy. Instead, poker sites such as TonyBet and PokerStars are marketing more towards the casual players and doing whatever it takes to keep them around long-term.