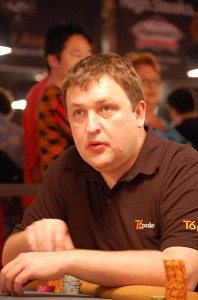 In between running for European Parliament as a candidate for the Lithuanian Liberal Party and urging Russians, in no uncertain terms, to mount their velocipedes and sally forth, Tony G has somehow found the time to organize the first Open Face Chinese Poker tournament ever held online. The OFC Poker Series kicks off today, and will run from April 28 to May 8 on G’s very own Tonybet Poker, which is the only online poker site dedicated solely to Open Face Chinese Poker, and will feature 12 events, with up to €25,000 ($34,562) in guaranteed prize pools.

“This is what we have been working towards to all this time,” gushed the Lithuanian/Australian poker pro and entrepreneur, whose given name is Antanas Guoga – though everyone knows him as Tony G. “We wanted to give players the best online open-face Chinese poker experience and I’m very happy with the result. I’m positive this is going to be a great series.

There’s loads of cash to be won and hopefully a lot of players will come to play. If not, we will have overlays, which is also good for the players. At Tonybet Poker, we want to reward every player and this is a great way to do this,” Guoga added.

For those late to the party, Open Face Chinese is a variant of Chinese poker in which players receive five cards initially and are then dealt one card at a time. Cards are dealt face up. Like Chinese poker, each player must use 13 cards to make a three-card front hand, a five-card middle hand and a five-card back hand; however, Open Face is filled with lots of quirky dynamics, with the ability to foul, as well as hit bonuses, with names like “Shooting the Moon” and “Fantasy Land.”

The game developed in Finland in the mid-noughties, where it spread to the high-stakes community in Russia and then the United States. By 2012, it had become a huge craze among poker players on the international circuit.

“I will be playing most of the tournaments and am very much looking forward to it,” said Tony G. “Maybe I will even put a bounty on my head, who knows? The only way to find out is to play.”