Many have long considered Tony G a professional troll. The trolling has, apparently, caused the former poker pro to be banned from entering Russia. 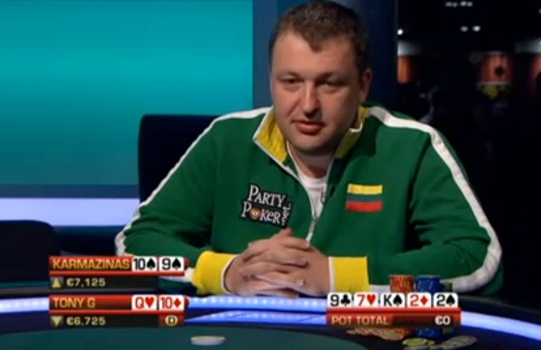 Antanus Guoga, his non-poker and birth name, is a member of the European Parliament for the Liberal Movement. Politico reported that the Lithuanian was added to a Russian blacklist, preventing him from entering the country. Tony G confirmed the accuracy of the report on Facebook.

“Antanas Guoga has been added to the list of MEPs banned from entering Russia. He thinks it may be partly because he trolled a Russian diplomat during a hearing in the European Parliament,” the article read.

That’s right, Tony G finally got into some hot water for trolling, perhaps for the first time since his full house was beaten by Vanessa Rousso’s higher boat in a televised high stakes cash game years ago. In that game, the politician taunted his opponent during the hand only to go bust. Some may refer to that as “karma.”

Why He Got Banned

Tony G, in a Facebook post, explained why he felt Russia blacklisted him from entering the country. He was a bit vague in his response, and the Russians haven’t confirmed if what he’s saying is true.

The former poker pro believes he was banned for speaking out in favor of anti-Russian policies. He refused to apologize for anything he said and doesn’t appear to be all too distraught over the ban.

Guoga isn’t a fan of Russian President Vladimir Putin. He has publicly criticized the leader, which is something the president despises. He also said his comments on Russian hacking and attempting to influence world elections may have contributed to the ban.

Guoga’s outspoken mentality as a politician won’t come as a surprise to poker players who followed his act on the felt. Tony G was a regular on many televised poker shows during the poker boom era.

He loved to taunt his opponents and proudly proclaimed, “I am the greatest.” As a tournament player, he has more than $4.8 million in lifetime winnings. But he hasn’t cashed in a live poker tournament since 2013.

The Lithuanian-Australian politician was a “love him or hate him” type of poker player, similar to Phil Hellmuth and Mike Matusow. Either you love poker pros who are loud and criticize the play of others at the table, or you despise that type of behavior

He’s more patriotic than our orange in chief!

You pukes can’t talk about anything without Trump being in your head. He OWNS you worthless liberal scum and laughs at you daily. Nice job skippy!

Smarter too , if he can see how dangerous Putin is