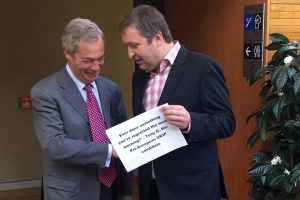 Antanas Guoga, Member of Europe Parliament for the Republic of Lithuania, or as most of us know him bombastic poker player Tony G, has a nose for a publicity opportunity. Which is why he is attempting to stand for the leadership of the UK Independence Party (UKIP).

A footnote for those not so hot on British politics: UKIP is a right-wing political party whose raison d’être has been to get Britain out of the European Union and tighten its border controls by stoking fears of immigration among the disenfranchised white working class population and Middle England.

Once upon a time it was a fringe party, commanding a minuscule percentage of the vote. But under the leadership of former stockbroker Nigel Farage, who took over in 2006, it has swept into the public consciousness (and ballot boxes) in the past few years on a wave of populism and broader political issues. These include climate change denial and something vague and abstract called “restoring Britishness.”

Prime Minister David Cameron once opined that the party was little more than a bunch of “fruitcakes, loonies, and closet racists.” Farage immediately demanded an apology, but none was forthcoming.

Now Farage has had the last laugh. The Brits bought it, and Britain is leaving the EU. And so, having achieved his lifelong ambition, it’s time for Farage to hang up his UKIP spurs and trot into the sunset. Farage is retiring, leaving behind him terrifying economic uncertainty, a pound plunging against the dollar, a very real chance of recession, and a probable break-up of his beloved UK, as Scotland looks to cede from a 300 year union.

Cameron has also resigned, and it has become increasingly and alarmingly clear that no one in the UK government really has a post-Brexit plan yet.

But Tony G has a plan: to take over UKIP and lead the party on a pro-Europe mandate!

“I am writing to you today to confirm my intention to run for the position of leader of UKIP,” he explained in a letter to the party’s returning officer Roger Bird. “I reviewed the leadership credentials and the party constitution and see no reason why a man of my standing cannot apply. So, I sincerely hope you receive my application in good faith.

“Given that recent research suggests that 1.2 million “Leave” voters regret their choice, UKIP needs a pro-European candidate to broaden the debate and represent the UKIP voters who have changed their mind,” he said.

Guoga’s status as pro-European Union Lithuanian MEP representing a Liberal Democrat party might make him an odd choice for the next leader of UKIP, but let’s face it; even stranger things have been happening in politics recently.

And it’s good to see that Guoga’s political career is continuing in the same vein as his poker career: challenging authority, seizing the limelight, always trolling.

Just prior to the Brexit referendum, Guoga challenged Farage to a £1 million wager that Britain would choose to stay in Europe, a bet, it’s fair to say, he is glad was not accepted.

I can’t say I don’t like him, I do . but I do consider him unethical.
so I guess that would make him a good politician.