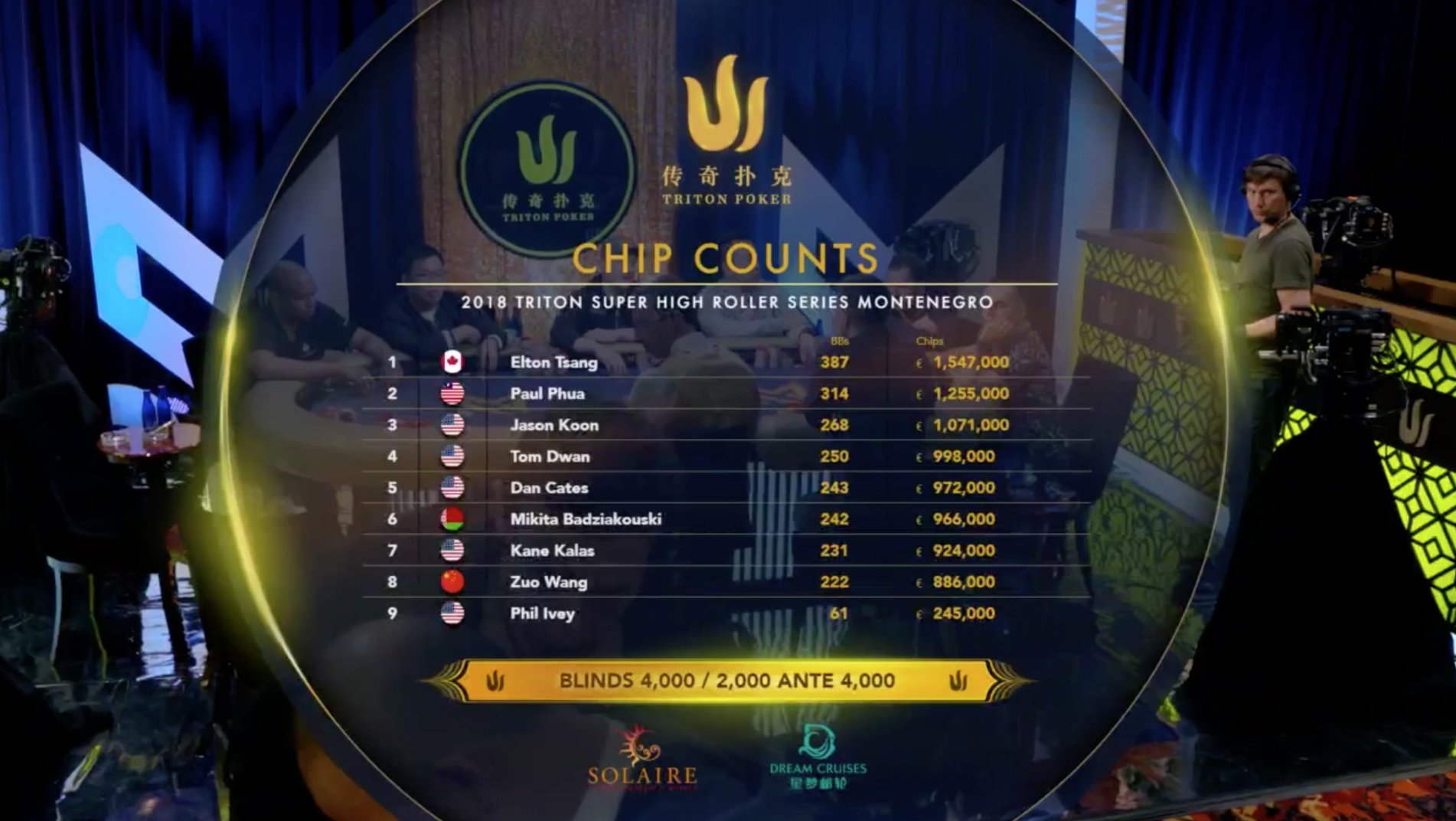 Tom Dwan and Phil Ivey competed in the largest cash game ever on television or livestream in Montenegro. (Image: Twitter)

If you’ve ever wondered what it’s like to watch the wealthiest poker players compete in the Macau nosebleed games, you caught a glimpse of that crazy action during the livestream in Montenegro, which is part of the Triton Super High Roller Poker Series.

Jason Koon was involved in the two largest pots, €1.8 million and €2 million, and was on the losing end in the former while taking down the latter.

The massive pots were in back-to-back hands. Koon dumped approximately €900,000 to Kane Kalas, the son of baseball broadcasting legend Harry Kalas, when his bluff turned into top pair on the river up against a set.

The loss forced Jason to rebuy, putting him in for €2 million in just a few hours. On the ensuing hand, which turned out to be the biggest hand ever played on livestream or television, a lucky river card got the Partypoker pro unstuck…barely.

Koon got the action started with a raise to €13,000 and the other players listed made the call. The flop came 8♥A♦7♥. The hand checked around to Dwan on the button and he bet out €24,000 with top pair and got a call from Tsang.

Koon then decided to check-raise to €100,000 with his open-ended straight flush draw. Phua and Durrrr folded, but Tsang, the 2016 Big One for One Drop Monte Carlo €1 million buy-in winner, was feeling frisky and may have assumed Koon was on tilt from the previous hand, so he fired out a raise to €324,000 with third pair and a backdoor flush draw.

The tricky three-bet didn’t get his opponent out of the pot and the action moved to the turn with €736,000 already in the middle.

The Q♦ on the turn gave Tsang some equity with a flush draw. Both players had just under €1 million behind.

Tsang sized up his bet to €390,000, leaving a potential one-third sized pot river bet if Koon made the call, which he did.

Tsang knew he had little, if any, fold equity, so he gave up bluffing and checked it over to his opponent who moved all-in, creating a pot of €2,090,000, exactly €90,000 above the money Koon had invested in the game.

Even with the favorable odds, Tsang had no choice but to fold and cut his losses short. And with that, Jason Koon took down the largest pot ever aired on television or livestream.

Who Knew Durrrrr Could Commentate?

Players rotated in and out of the game throughout the livestream, including Dwan who began the session as a commentator. It was the first time the online poker legend provided commentary for a live poker game and the poker community, including podcaster Joe Ingram, was impressed with his hand analysis.

Durrrr eventually stepped into the game to face his nemesis Dan “Jungleman” Cates, Phil Ivey, Jason Koon, and some wealthy high-stakes gamblers he loves to compete against in the big Macau cash games.

Kalas was the game’s biggest winner thanks to the massive pot he won against Koon and was up over €700,000 when the production crew pulled the plug on the livestream at just after 5 am local time in Montenegro.

The game continued without cameras rolling but none of the players have reported how the session concluded.

This is a very fun game to watch. Brings us back to the good ole’ days.

where can we watch this?

Go to TritonPoker on YouTube. You’ll see a link to the cash game.

Here is the 5 hour video
https://youtu.be/iOJMS11OJaI