Tom Dwan, one of the most feared online poker players of all-time, has avoided the spotlight the past couple of years. Many have been left wondering if “durrrr” went broke or quit playing poker.

He hasn’t posted on Twitter since 2015 and never showed up for the 2016 World Series of Poker. 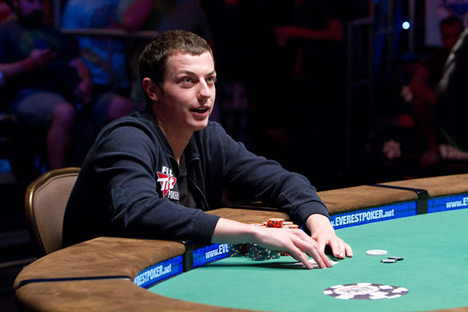 Tom Dwan resurfaced in a poker strategy video with Paul Phua, but still hasn’t answered the question: what the heck is “durrrr” up to these days? (Image: pokervip.com)

But the online poker legend recently came out of hibernation. In a video with Paul Phua, one of his fellow high rollers, Dwan discussed poker strategy.

They didn’t discuss where Dwan has been spending his time the past couple of years, however.

“So, do you agree that amateurs don’t trap enough?” Dwan asked at the beginning of the first video.

“Yeah, usually they would just bet, bet, bet with whatever,” Phua responded.

Phua clearly isn’t a fan of always betting big hands. He feels amateurs would get more value if they induced an opponent to bet into their monster hands instead of being the aggressor.

“What do you think the spots are that they trap the most?” Durrrr asked.

“Amateur players, they trap the most with premium hands,” Phua answered. “Even pre-flop.”

In the second video, the poker pros agreed people tend to play a certain way based on their occupation and ethnicity. Dwan says older people that are just starting out play “too passive,” and younger people “bluff too much” at first.

Phua, a businessman from Macau, China, agreed with Tom’s assertions. He added that Scandinavians are aggressive, Chinese poker players like to see flops, and Americans are a mixture of aggressive and passive.

Two Peas in a Pod

Phua and Dwan have a history together that extends beyond the poker table. In July 2014, along with his son, Paul was arrested in Las Vegas on suspicion of operating an illegal sports betting operation. Charges were eventually dropped a year later.

Dwan, a regular in cash games with Phua in Macau, came to his defense following the arrest. Durrrr filed a sworn affidavit at the time questioning the tactics of the FBI agents investigating the alleged crime.

The two high rollers have much in common despite a significant age gap and being from different parts of the world. They both love action and have won big playing poker.

But where is Tom Dwan these days? No one outside his inner circle seems to know. Many have suggested he’s still crushing the high stakes cash games in Macau. Others claim he’s gone broke. Nobody seems to know the truth.