Tom Cannuli Talks to CardsChat About Life After the WSOP Final Table, Big Dreams, and Playing with Class: Exclusive Interview

Tom Cannuli finished 6th in the 2015 World Series of Poker Main Event. The cash game pro took home $1.4 million for his efforts, accounting for more than 96 percent of his career live tournament winnings to date. 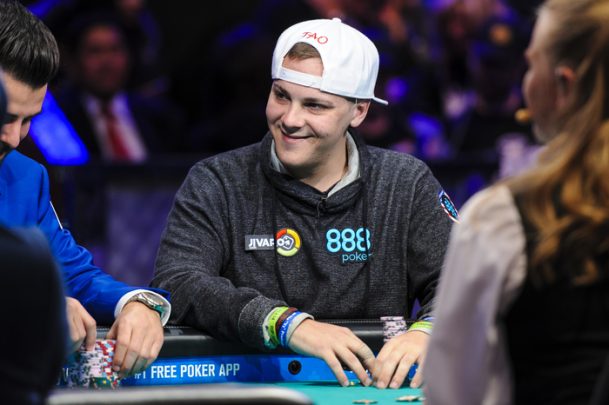 888 sponsored pro Tom Cannuli, who was a November Niner last year, spoke to CardsChat about his plans for this year’s WSOP, and his life plans during and after poker. (Image: 888poker)

Now the 23-year old is ready to show the poker world his deep run was no fluke, and that more of the same is in store. Cannuli was kind enough to chat with CardsChat this week by phone, discussing his goals, what he has planned for the future, and what he could have done better to stop eventual Main Event Joe McKeehen from victory last year.

Cannuli has competed in cash games on the East Coast for quite some time, despite his age. Given his tournament resume outside of the Main Event, I was a bit surprised to hear what he considers his best game.

“Right now, it’s tournaments,” he told me. “I’ve never felt as strong as I do now about my tournament game.”

His passion for poker comes out when he speaks. He loves this game and so badly wants to win WSOP bracelets and leave his mark on the game. And he’s plenty confident that’s going to happen.

With the kickoff of the WSOP merely days away, Tom is pumped up and ready to go. So what events does he plan to play?

“Every other summer, I would stick to grinding cash games. But if you want a bracelet, you have to play the Series. You have to give yourself a chance.”

Mind you, Cannuli understands the high variance of tournament poker, especially large field events such as pepper the WSOP, so he realizes that even though he is confident in his game, bad luck could prevent him from success this year, or any year. Speaking of preparing for the Series, Tom seems to know what it takes to get ready.

“You want to make sure you’re really hydrated and you have food in your body.  Playing on an empty stomach is not successful, in my opinion.”

After his 6th place finish, the 888poker pro took some time off. Other than playing cash games and a few tournaments here and there, Cannuli has been relaxing his mind to get ready for the World Series.

I feel like I usually have a good read on people. From my discussion with Tom Cannuli, there’s no doubt this guy is extremely confident in his abilities as a poker player, but I don’t get the sense that he is cocky.

He wants to do big things. When I asked him what his future goals are, he made it clear he has no intention of settling for just one deep major tournament run. But many young poker stars eventually get burnt out on the game.

Not everyone can be like Doyle Brunson, crushing high stakes cash games at 82 years old. Does Tom envision a lifelong poker career, or does he have something else in mind for later in life?

“I do, man, I see it.  The greatest thing about poker is that it’s amazing. I have the biggest passion for poker. I love to play poker. When you have that passion and a good work ethic, success will come to you,” he said.

“I have a lot of things that I would like to do in my life, but I’m always going to be at the WSOP every single summer,” he continued.

As much as poker glory means to Cannuli, there’s something else that appears to be just as important.

“I want to help kids have motivation to come from nothing to something. There’s a lot of things I want to accomplish outside of poker,” he was proud to say.

After discussing his poker plans, I went a little off the board with this young gun. Recently, Daniel Negreanu sparked a debate on Twitter when he suggested it was more difficult to win at the poker tables years ago than it is now. As expected, the new-school players didn’t take too kindly to his claims. Cannuli gave me his two cents on the topic.

“I’ve definitely got to give the old-timers some credit. But if you want to look at the overall old guys compared to the young guys, I’d have to go with the younger generation, just because there’s not a ton of [the old guard] that are competing at the highest level still,” he opined.

Joe McKeehen entered the 2015 WSOP Main Event final table with a commanding chip lead and completely dominated play on his way to victory. In retrospect, could Cannuli, or any of the other November Niners, have been able to challenge his chip stack more or was he just running too amazingly hot?

“He wasn’t running too good for it to matter. He played incredible throughout that tournament. I have zero regrets for my play. I didn’t have the right position to go after his big stack,” the 888poker pro said. 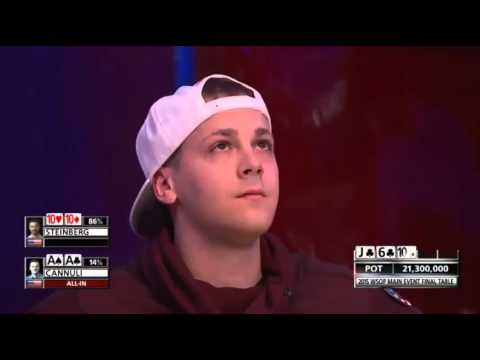 Just one time: it wasn’t in the cards in 2015 for Cannuli, who gracefully busted in 6th place from the final table with pocket rockets. (Image: ESPN/youtube.com)

On Day Two of the final table, Cannuli was the first to bust. Entering the day, he had hoped to double-up, so that he could start making moves and possibly make a run at McKeehen’s chip lead. But he lost his all-in moment, which spoiled his plans.

Winning and losing with class is Tom’s motto. Although he says he doesn’t hate players who whine and complain after a bad beat or taunt an opponent, he dislikes when they do it, nonetheless.

When I asked him which player(s) he doesn’t want to see at a poker table, I expected him to mention hard-to-beat top pros like Phil Ivey or Scott Seiver, because they’re so tough. But that wasn’t the case.

“I would say there’s a guy that I have a long history with that I’ve played cash with basically since I’ve been 21 at Borgata. We would win and lose $50k pots against each other. But recently, every time I win a pot against him, he complains. His name is Dan Howe.  He never used to say anything, but now he complains after every pot he loses. I just can’t stand his whining,” he said, but wanted to make it clear he respects Howe anyway.

“But, let me say this, he’s a great guy. It’s nothing personal.”

One thing that appears to bother Cannuli more than anything else at the poker table would be opponents who act childishly. He believes in having integrity, win or lose. Perhaps that’s why 888poker signed him on to represent its brand.

Nice article. His interview after his bustout from the WSOP inspired me a lot. Definetly worth a watch if you haven’t yet.