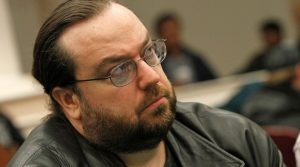 Todd Brunson and Carlos Mortensen will become the newest members of the Poker Hall of Fame at a ceremony at Binion’s Gambling Hall in Las Vegas at 7:00 pm on October 26.

The pros will join an elite fraternity of now 52 of the game’s greatest players and most valuable industry personnel.

Brunson is the son of Doyle Brunson, a 1988 inductee who is still grinding the high stakes cash games. Mortensen is best known for winning the 2001 WSOP Main Event.

Both players have been successful over the years in high stakes cash games and tournaments. They are respected members of the poker community.

When the 10 nominees were announced recently, debate sparked on social media and internet forums about who should be inducted. Many debated if Chris Moneymaker, the 2003 WSOP Main Event champ, deserved induction.

Those on Moneymaker’s side argued his big win was the single most important moment in poker history. But others claimed players should be judged based on an overall body of work. Moneymaker doesn’t have a long list of major tournament wins nor has he been a regular in high stakes cash games.

Max Pescatori’s name was also brought up often. He’s a five-time WSOP bracelet winner. But, apparently, that wasn’t good enough for the selection committee. No more than two players can be inducted each year.

Todd Brunson will always be remembered as Doyle’s son, but he isn’t joining the Poker Hall of Fame for that sole reason. Todd has been, as he likes to say, “incinerating faces” at the poker table all on his own, for many years.

He’s incinerated faces to the tune of over $4 million in live tournament winnings and lord knows how much more he’s won in cash games.

Brunson has been a regular for years in some of the highest stakes cash games in Las Vegas. In 2015, he incinerated the heck out of billionaire Andy Beal’s face, winning a reported $5 million in one session at the Bellagio in a heads-up match.

Oddly enough, Todd didn’t learn poker from his legendary father. He learned the game while studying law at Texas Tech University. Before graduation, he dropped out to play poker for a living. He probably isn’t regretting that decision.

More than a Main Event Champ

If you think Carlos Mortensen is a one trick pony, you’d be sadly mistaken. Sure, his biggest claim to fame is winning the 2001 WSOP Main Event. But it’s impossible to accomplish something greater than winning the world’s most prestigious event.

Mortensen is the all-time winningest live tournament poker player in Spain’s history. He has more than $11 million in tournament wins throughout his life. His biggest score came in 2007 at the $25,000 buy-in WPT Five Star World Poker Classic in Las Vegas for $3.9 million.

The 44-year old Spaniard is one of the most likeable guys on the poker circuit. You’d be hard pressed to find anyone who has something negative to say about the WPT and WSOP champ.