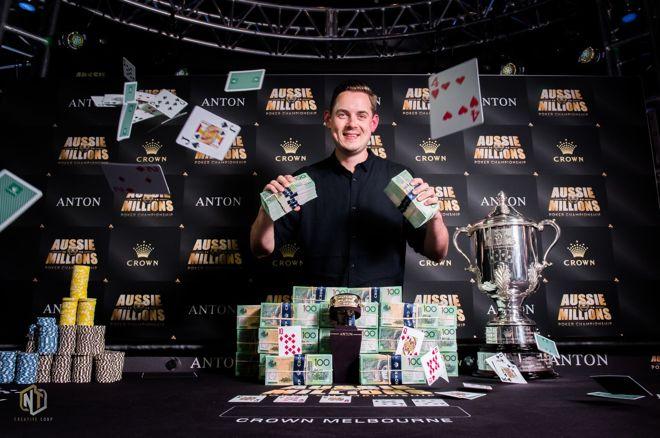 Toby Lewis began the final table with the chip lead and as the most experienced player, so it was no surprise to see him walk away with the Southern Hemisphere’s most prestigious poker title. (Image: Aussie Millions).

This year’s Aussie Millions hasn’t been without drama, which we highlighted last week. But while the high-roller fields may have been tiny, the Main Event saw the largest turnout in the event’s 21-year history, dating back to when it was the Australian Poker Championships.

“The last time I won a big tournament was seven and a half years ago,” Lewis said after his win. “I’ve played a lot of poker in that time, with lots of fourth and fifth places over the years. So, once I got a big stack in this one, it seemed like a great spot to go on and win!”

Lewis check-raised to 625,000, Huber called, and the dealer burned and turned the 7♠. Lewis checked and Huber bet 700,000. Lewis then check-raised again, this time moving all in, and Huber called off for 3.26 million. Unfortunately for Huber, he was drawing dead headed to the river, which was the meaningless 5♠.

“Over the last few months I’ve been working on my game a lot harder than I ever have,” Lewis added. “Today I made sure my concentration was 100% no matter how tired I was, and it worked out.”

Another Deep Run for Engel

Playing in that instance is pure adrenaline. manage to maintain the concentration avoiding pressures and duration, evaluating and making the correct reading. a great prize that can allow him to be placed in another way among the greats. We hope that this achievement can be sustained in time and not spend another 7 years to occupy again a 1 st place