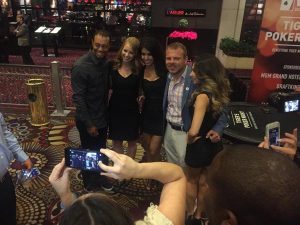 The rail focuses on Woods’ bald spot as he plays poker alongside the likes of Mark Cuban and Daniel Negreanu. (Image: @WPT)

Kicking off last Friday and featuring some of the biggest stars from the world of poker and beyond, the Las Vegas event featured two days of golf, poker and partying, but in among the money being raised for the Tiger Woods Foundation, the thinning nature of Woods’ hairline was the focus of many railbirds.

After getting the annual charity poker tournament underway inside the MGM Grand, the professional golfer sat down alongside Dallas Mavericks owner, Mark Cuban, for a few rounds of betting.

With more than $50 billion in wealth sat at the table, as well as the likes of Phil Hellmuth, Daniel Negreanu and Mike Sexton in attendance, the tournament certainly had the necessary star power to raise awareness and cash.

However, as the cards began to fly, Woods’ bald spot was the main thing capturing the headlines. 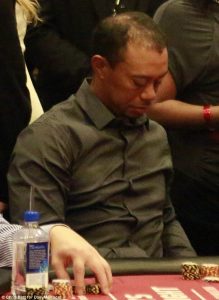 From CBS Sports to the Daily Mail, the storyline being told around the world following the poker tournament was Wood’s growing lack of hair.

While that editorial angle might not be the one Woods would have chosen himself, it has generated a huge amount of interest in the event and, therefore, the Tiger Woods Foundation.

Although live updates from the tournament were scarce, a constant stream of Twitter updates revealed some telling moments from the poker room.

At one stage, Hellmuth, Negreanu, Sexton and Woods were all on the same table.

Despite holding his own for a few hours, Woods eventually found himself all-in and in trouble against Mr. Hellmuth.

Holding J-5, the golf star was unable to come from behind and snatch a win against Hellmuth’s A-K.

Travis Takes it Down

That elimination helped push Hellmuth towards the final table, but as the chips began to fly not even the leading WSOP bracelet winner of all time could stay alive long enough to win the title.

That honor went to unknown amateur, Travis. After winning heads-up, the plucky player was able to bask in the glory of winning the star-studded event alongside Woods and the WPT’s Royal Flush Girls.

With the poker over, the players and their supporters were then whisked off to a private party where Ed Sheeran provided some light entertainment. The English singer wowed the crowds and provided a glittering finale to another successful Tiger Jam event.

Although the exact amount of money raised through the tournament and its auxiliary events, including a celebrity auction is unknown, it’s expected the whole event raised well in excess of $1 million for Woods’ charity.

Tiger continue to socialize with WINNERS!!