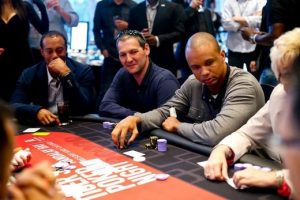 Tiger Woods and “the Tiger Woods of Poker”, Phil Ivey at the same table at Tiger’s Poker Night 2014. (Image: CardPlayer)

Tiger Woods was a no-show at the Master’s last week due to injury, but he will be at the MGM Grand Hotel & Casino in Las Vegas Friday, April 29. Eldrick won’t be competing in a PGA Tour event. Instead, he will be hosting a charity outing which includes a high stakes poker tournament.

The Tiger Woods Foundation strives to help kids succeed through scholarships, after-school programs, and education. This event is intended to raise money for his charity.

Tiger’s Poker Night, sponsored by the World Poker Tour, is an $11,000 buy-in tournament in Las Vegas. Phil Hellmuth, a close friend of the legendary golfer, will handle the emcee duties at MGM.

The poker tournament is part of the 18th annual Tiger Jam festival. The goal of the weekend is to, of course, raise money for Tiger’s foundation. But will also be an exciting two days filled with all sorts of entertaining activities.

Tiger’s Poker Night is a different type of charity tournament. No cash prizes will be awarded. In the past winners have received tickets to MGM Grand events, a trip to Nike headquarters, among others. This year’s prizes are unknown at this time.

CardsChat spoke to a representative from the golfer’s charity and were informed approximately 50 participants will compete. The poker tournament begins at 7:15 in the evening. A cocktail reception beforehand starts at 6:00.

Tiger Jam kicks off earlier in the day at Shadow Creek Golf Course in Las Vegas with a golf outing. Golfers will hit the links again the following day.

On Saturday, a silent and live auction will take place, with some expensive items up for bid. The charity event concludes that evening with a Jason Mraz concert at MGM. Proceeds raised over the weekend will go to the Tiger Woods Foundation.

Those interested in participating in Tiger Jam must make the required donation. The Poker Experience costs $11,000 and includes a tournament buy-in, tickets to the concert, and more. Or, you could just win the WPT Tournament of Champions and receive free entry.

There are four additional packages which do not include the poker game.

“No He Can’t Read My Poker Face”

Lady Gaga’s “Poker Face” song wasn’t written about Tiger Woods, but it could have been. Tiger has long been known for his poker face on and off the golf course, so it’s no surprise he enjoys a game of cards.

He rarely shows much emotion during interviews or at a golf tournament unless, of course, he misses a short putt or a fan talks loudly in the middle of his backswing. On top of that, he is an intelligent guy (attended Stanford University). Brains, a hefty bankroll, and a good poker face is the perfect mix for a poker player.

Perhaps that is why Phil Ivey is so successful on the felt. Ivey is dubbed “the Tiger Woods of Poker” due to his similar demeanor and golf obsession. He has been known to compete in high stakes golf wagers. Both are competitive individuals often considered the best of all-time in their sport.

Woods has battled injuries in recent years and is no longer one of the top golfers in the world, however. But he’s still one of the biggest celebrities in the world. MGM Grand in Las Vegas will be the place to be April 29-30.

Hi Tiger, good luck in Tiger Jam Tournament,but please do your self a favour and remove that band from your hand,and pray to the only true living God.Do that and you will see a change in your fortune.You may not believe me, but try it and see. You don’t have much to loose,but ,very much to gain. Live You, Arlene.