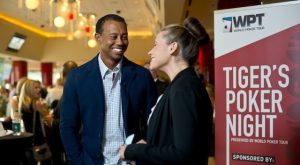 Tiger Woods has long been compared to Phil Ivey as both a top-level champion and a controversial character in their respective sports. But could he actually give Ivey a run for his money at the poker tables?

We’re about to find out as the fourth annual “Tiger Jam” charity poker tournament gets underway in Las Vegas tomorrow (May 14).

Hosted by Woods himself, the star-studded event at the MGM Grand will feature “the Tiger Woods of Emcees,” Phil Hellmuth, on the mic, as well as guest appearances on the felt from Doyle Brunson, Mike Sexton, Daniel Negreanu and Antonio Esfandiari, among others. Phil Ivey, to our knowledge, is not expected to attend.

The WPT cameras will be rolling and the champagne will be flowing; it’s the hottest ticket in town; the Tiger Woods of Charity Poker Tournaments, if you will, and unfortunately for us it’s completely sold out.

Prizes include a round of golf with Woods, Pro-Am playing spots in premier PGA TOUR events and more. Meanwhile, Ed Sheeran, the Tiger Woods of Catchy Folk-Pop, will finish things off with a private concert.

Since its creation in 1998, Tiger Jam has raised more than $17 million for the Tiger Woods Foundation, which funds the college-access opportunities for low-income students of which Woods himself was a benefactor.

“I’m proud that our work is making a real difference for our students,” he once said of the foundation’s work, during an interview with Forbes.

“Education is the key to breaking the cycle of poverty, and we see this every day in the work we do. Almost 90% of our college scholars are first in their families to graduate, which is a game changer for those families. I’m very proud of that.”

There has long been a synergy between poker and golf; something about the stark individualism of the game, not to mention the myriad opportunities for prop betting, and poker players from Johnny Moss, to Doyle Brunson, to Daniel Negreanu have fallen in love with it.

It’s no surprise, then, that so many will turn out tomorrow to honor arguably the greatest golfer to ever hit the fairways, while raising some money for charity along the way.