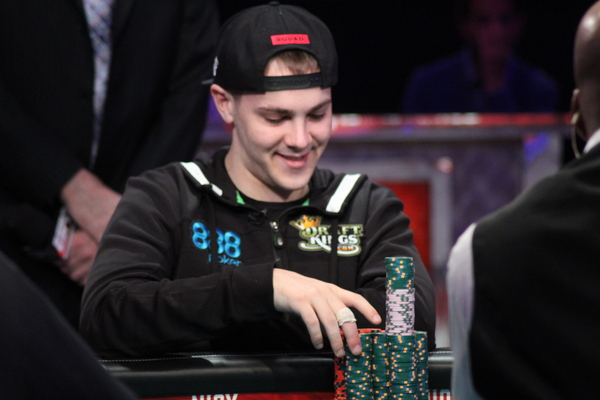 23-year old Thomas Cannuli of New Jersey will be at a chip disadvantage when the 2015 WSOP Main Event resumes November 8. But several top poker pros seem to believe the cash expert can prove himself and take down the bracelet. (Image: 888poker.com)

Thomas Cannuli made his way to the 2015 WSOP November Nine. If that name doesn’t ring a bell, you aren’t alone. Cannuli isn’t a household name to the average poker fan, but he is well-respected among his peers, including top poker pros such as Antonio Esfandiari, Brian Rast, and Sorel Mizzi.

The 23-year New Jersey native doesn’t have any prior big tournament wins, and he isn’t a tournament specialist. But Cannuli, by all accounts, crushes cash games on the East Coast. His career tournament earnings, including the $1,001,020 won so far in the 2015 WSOP Main Event, barely exceeds $1,050,000.

If he’s going to take down the WSOP Main Event final table which kicks off on November 8th, he will need a healthy dose of good fortune. His chip stack of 12,250,000 is only worth 31 big blinds, and just one-fifth the size of chip leader Joe McKeehen’s stack.

Despite arguably being the least accomplished tournament player at the final table, Cannuli will likely have the most impressive rail backing him at the Rio.

It is unknown which poker players bought action on Cannuli, but rumors floating around have suggested his backers include Esfandiari and even Olympic swimmer Michael Phelps.

Cannuli is a bit of a wild card at the final table. He has yet to prove he can win a tournament, but the fact that he has such an impressive rail should make his opponents a bit wary. Speaking to Bluff Magazine, he expressed a positive attitude in his game recently.

“I’m very confident in myself. I haven’t had a lot of exposure and that’s why a lot of people don’t know about me,” he told Bluff.

Confidence is important in poker, but it won’t be the only factor in determining his fate at the final table. He will be given an opportunity to show the poker world his confidence is justified.

2015 wasn’t the only year Cannuli had success in the Main Event. He cashed in 2014, finishing in 691st place. After Day Two, he was fourth in chips, not too far behind chip leader Phil Ivey.

If Cannuli’s backers are looking for an indication he could win the Main Event, his consistent play throughout the event is a good one.

Cannuli increased his stack each day thus far through the first seven days of the tournament. That’s a good sign because it shows he didn’t make it this far on a few lucky hands. He showed determined performance and an ability to grind through an entire grueling week.

Come November 8th, he’ll need to grind it out for three more days if he is to win the whole enchilada. The poker world is waiting in anticipation to see if Thomas Cannuli is the player some top poker pros seem to believe has tournament greatness in him, or if he should just stick to cash games.