It has been a long couple of years for poker players in Los Angeles. Extra protocols set in place by the California government have made it difficult for poker tournaments to return to Southern California, even with a huge boost in numbers taking place in Las Vegas. However, LA grinders can now rejoice as tournaments, some with big guarantees, are coming back to the Bicycle Casino in Bell Gardens. 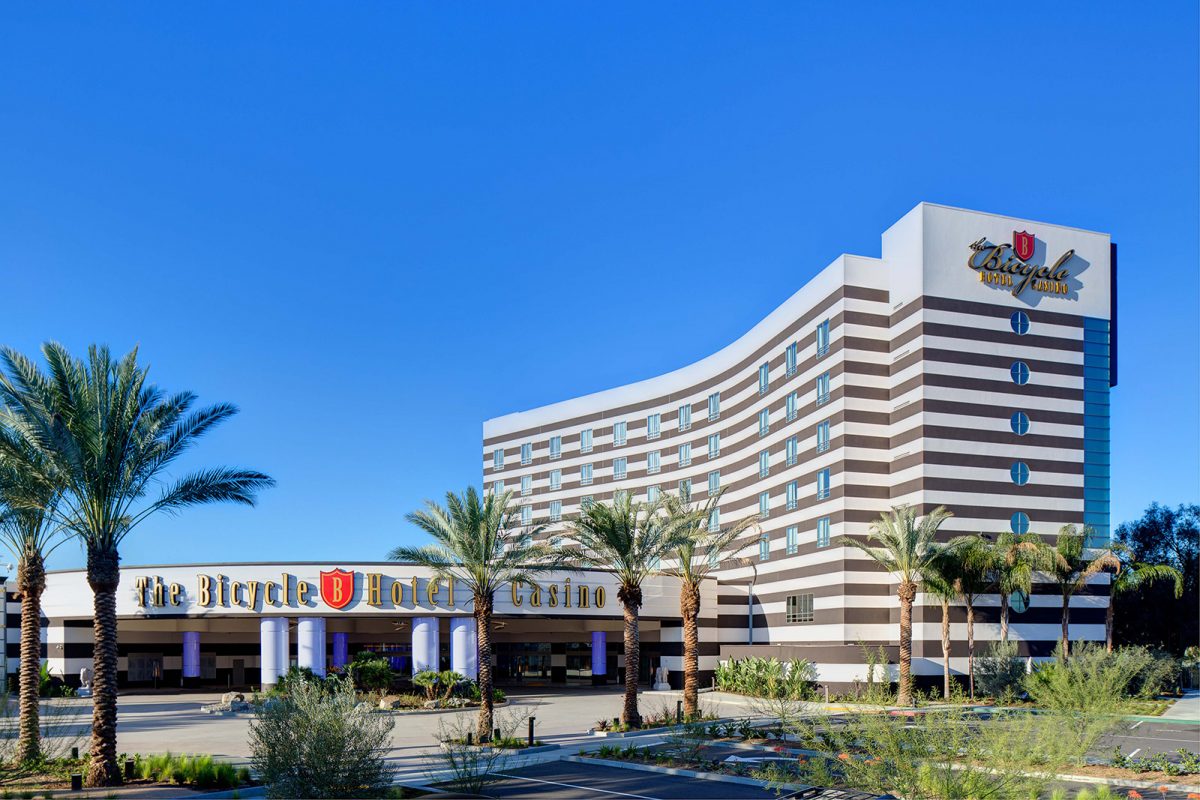 Tournament poker returns to the Bike in Los Angeles later this month when the Casino’s Quantum Series and the WSOPC come to town. (Image: Bicycle Casino)

“For two years I didn’t work, but I was checking out schedules, structures, other casinos,” Fathipour said. “I love to be here right now to start again. All tournaments all the time, just like we had it before. I’m glad I’m bringing a lot of staff back, and they are all safe and in good shape.”

The action kicks off on Friday, Nov. 26 with a one-day $40,000 guaranteed event. That’s followed up by the first of three of the Bike’s Quantum tournaments, each of which features a prize pool of at least $200,000.

Quantum tournaments use a structure that offers different buy-ins, multiple start times, and varying starting stacks competing for one large prize pool. In the first Quantum event, a Day 1 buy-in is $300, but someone can also get in on Day 2 with an average stack for $2,000.

In addition to the return of Quantum events, the WSOP Circuit will stop at the Bike with 13 ring events running Dec. 4 – 15. 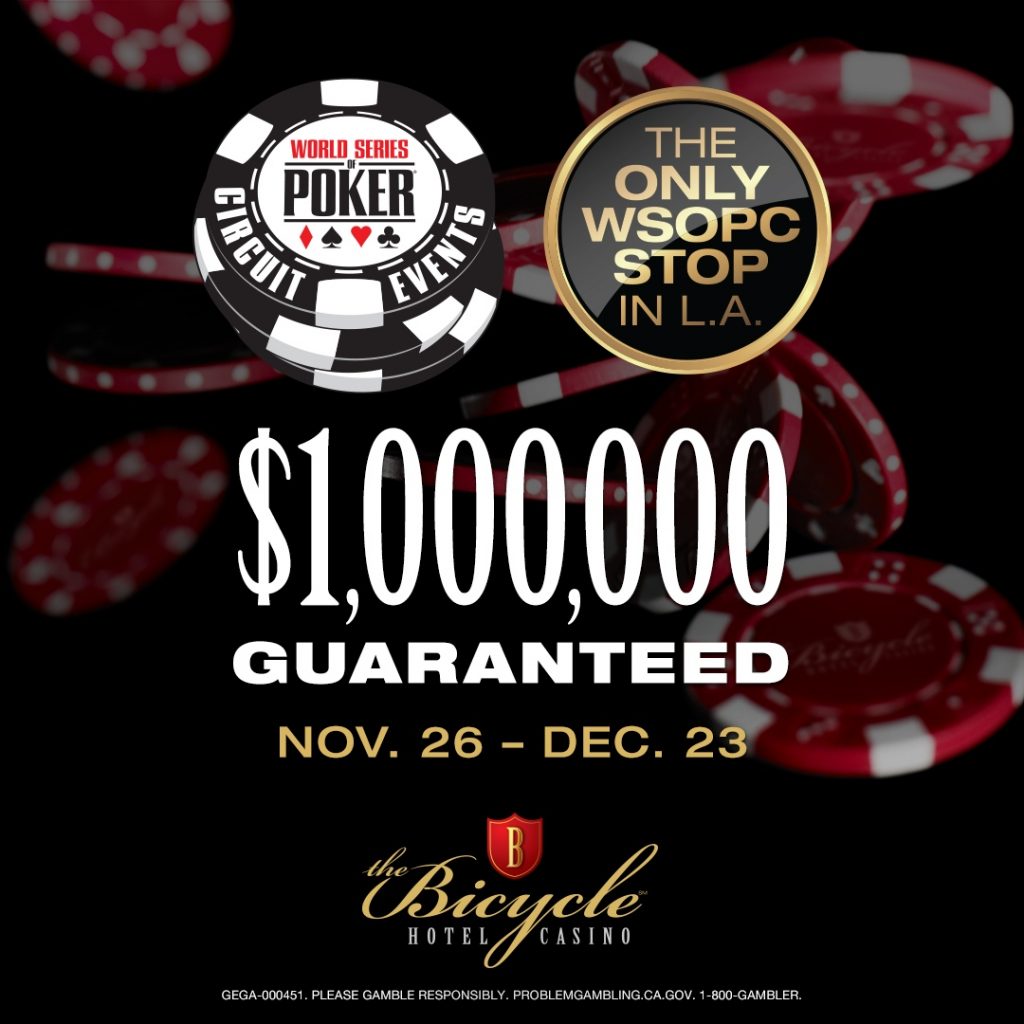 The WSOP Circuit is finally making its way back into California, with a $1 million guaranteed tournament series at The Bike. (Image: Bicycle Casino)

All in all, there will be more than $1.1 million in guarantees spread out over a month’s worth of events, wrapping up with a $300,000 guaranteed event that ends just before Christmas.

Fathipour says he wasn’t coming back to the Bike unless there were big guarantees.

“I didn’t want to do small tournaments with no guarantees like other casinos,” he said. “If I’m starting, I’m starting with guarantees. People expect that at the Bike, and that’s what we are bringing. Now, we have $200,000, 300,000 guaranteed, even a one-day $50,000 guaranteed. I know I’m going to get it, because I know people want in.”

Originally, the Bicycle Casino had planned to bring tournaments back in October. They put out a notice that they were hiring dealers and floor staff for the series. A combination of factors delayed those plans because the casino ran into staffing shortages, Fathipour said.

“I put an open position on HR for hiring dealers. After a month I had six staff and five dealers. Total of 11 employees. I can’t put together a tournament with 6-7 dealers. There was a dealer shortage because of EDD (California’s Employment Development Department). No one wanted to work and pay tax and get less than EDD, and then there was the World Series, so I couldn’t do it.”

Fathipour said the staffing issues coupled with the WSOP running just a few hours away in Las Vegas made delaying the return of tournament poker until just before the WSOP Circuit begins the only logical choice.

“I told the owner that I probably have to cancel the tournaments because of that shortage,” Fathipour said. “In December, the World Series will be finished, and I’ll have more people to work with.”

Mask requirements part of the game

With COVID-19 still a factor across much of the country, Fathipour says the Bike is taking player safety seriously for the upcoming tournament series. While he didn’t mention anything about vaccine mandates, Fathipour did say that all players will be required to wear masks during the tournaments, and that players who show symptoms of COVID-19 will be subject to disqualification. 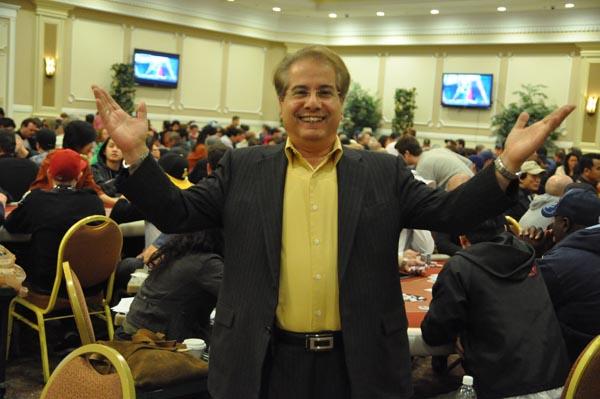 Mo Fathipour is looking forward to welcoming tournament players back to the Bike, even if they’ll be wearing masks when they return. (Image: WSOP)

“In here, we are requiring only masks, but I’m going to post a showcard that if anyone has symptoms of Corona, a cough — anything — we are going to take temperatures. They could be disqualified from the tournaments, or their chips could be blinded off in Day 2.”

Despite the mask mandates, Fathipour says the Bike will allow players to order food at the tables in an effort to once again establish the property as the go-to destination for tournament poker in Southern California.