This past weekend, the 2017 MSPT Indiana State Poker Championship drew 320 runners to Tropicana Evansville. After two long days of play, 32-year-old Satish Thakur, an IT programmer for the state of Michigan, emerged victorious to capture a $71,047 prize. 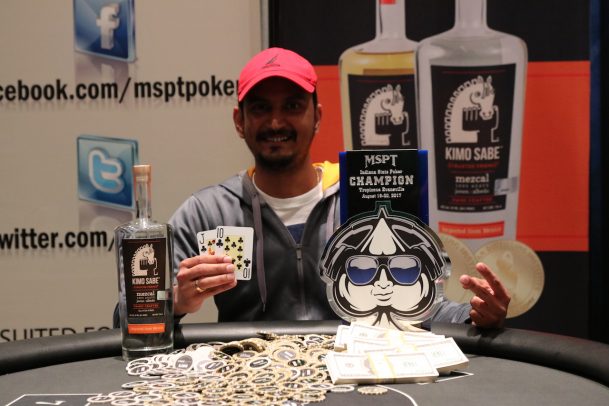 Satish Thakur is an IT programmer for the state of Michigan, but after his MSPT win on Sunday he’s now known as Indiana’s State Poker Champion. (Image: MSPT)

Thakur was railed by two friends at the final table, and while they were there to share the moment, the real celebration will occur this weekend when his wife visits from India.

“Feeling great, man, it’s a dream,” Thakur said after the win. “I drove all the way from Michigan. I play the MSPT a lot, especially at FireKeepers. I was really short at one point, [Big Al] had a huge chip stack, but patience paid off.”

Thakur was referring to his heads-up opponent, “Big” Al Hedin, who was less than a month removed from finishing sixth in the MSPT Iowa State Poker Championship. Hedin began heads-up play with a 3-to-1 chip lead over Thakur, but the duo ended up battling for nearly three hours.

Meanwhile, it was the largest score of Thakur’s playing career, which has been comprised solely of MSPT events. He previously had three cashes on the tour, all at his home venue, FireKeepers Casino in Battle Creek, Michigan. His previous best cash was $19,944 for finishing eighth in the 2016 MSPT Michigan State Poker Championship.

One of the more interesting hands of the entire tournament occurred early at the final table. It happened in Level 24 (12k/24k/4k) when satellite winner Ross Bryant looked down at A♣A♦ and raised to 55,000 from early position. He received four callers, including two holding pocket eights and nines, before five-time WSOP Circuit ring winner Kurt Jewell called from the big blind with 6♥6♠.

Jewell checked his flop quads. Bryant ended up betting 300,000 and then called when Jewell jammed for just a little bit more. Neither the 3♠ turn nor 2♦ river changed a thing and Jewell more than doubled up.

Bryant went on to finish eighth in the MSPT Indiana State Poker Championship while Jewell finished a couple spots better in sixth.

Season 8 of the MSPT continues next weekend with an $1,100 buy-in, $150,000 guaranteed Main Event at Grand Falls Casino just outside Sioux Falls, South Dakota.