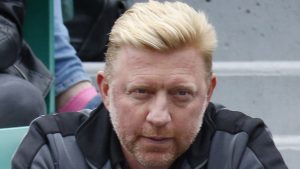 Tennis legend Boris Becker is now a partypoker ambassador and will help promote a series of new tournaments for the online poker site.

Becker, who was once a PokerStars ambassador, has long been a fan of the game.

Wanting a new way to satisfy his competitive urges after retiring from tennis, Becker followed the lead of sportsman such as former cricketer Shane Warne and soccer star Teddy Sheringham to the tables.

With just over $111,400 in live earnings, including a 15th place finish in the recent Devilfish Cup at the WPT UK in Nottingham, Becker is certainly no slouch at the felt.

In fact, compared to some of the recent sporting signings by poker sites (think Cristiano Ronaldo), Becker is a fairly accomplished player.

In addition to using his profile to promote partypoker’s new Millions tournament set to run in 2017, Germany’s Becker will be helping to increase the operator’s presence in his native country.

Along with another new signing, PLO expert and fellow German Jan-Peter Jachtmann, Becker will be promoting poker in one of the most buoyant markets in the industry.

As it stands, partypoker has dropped out of the top five in recent months thanks to the rise of 888poker and Winamax, but a push in Germany could be what’s needed to revive its fortunes.

Unlike other online poker sites that have been focused on celebrity signings over the past year, partypoker has opted to recruit established pros.

Jackie Glazier and Sam Trickett have been confirmed as ambassadors in 2016, which makes Becker’s deal a slight break from the norm. Although partypoker did sign former boxing champion Carl Froch in 2015, the operator has certainly put more stock in professional poker players than it has celebrities.

The Age of Celebrity Endorsements

However, Becker is certainly more of a celebrity than a poker player despite his previous achievements at the felt. This would suggest that partypoker is looking to keep one foot in the celebrity stakes, but not quite as much as its peers.

There’s no doubt that the exposure people like Cristiano Ronaldo have brought to the game over the last 12 months has been impressive. Although he’s barely played in any live events as a PokerStars ambassador, Ronaldo has featured in numerous ad campaigns.

Thanks to his international reputation and 100 million+ social media followers, Ronaldo has helped expose poker to the masses. Although Becker won’t have as much reach as Ronaldo, he’s certainly a global star and that should help partypoker both in Germany and beyond.