At least eight teams are within striking distance in the 2018 WSOP $25K Fantasy league, with Team FTGB – owned by Alex Foxen, Ryan Riess, and Anthony Zinno – holding onto the slimmest of leads. 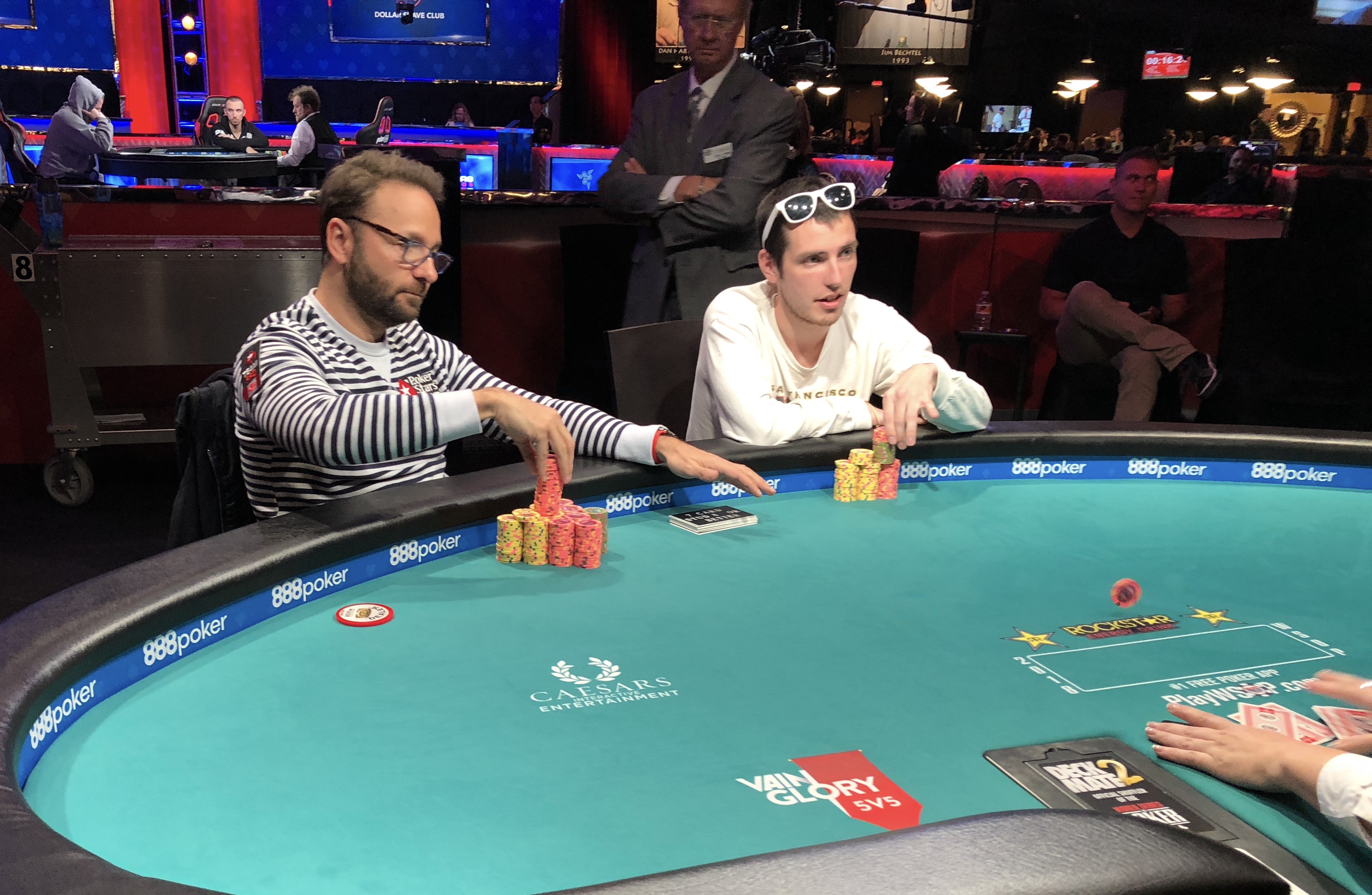 Daniel Negreanu (left) is having a disappointing 2018 WSOP, despite two final table appearances, and an even more disappointing year for his high roller fantasy team. (Image: CardsChat News)

Team FTGB holds a slim lead with 682 points over Team Turner (674) and Team Eldridge (668) with 18 remaining events on the 2018 WSOP schedule, including the Main Event, which is worth three times as many fantasy league points as other tournaments.

Team FTGB has gotten a combined 320 of its 682 points from two of its owners, Zinno and Foxen. Zinno has two final table appearances and is currently 9th in the WSOP Player of the Year standings. Foxen, who also won an MSPT event this summer which doesn’t count in the $25K Fantasy league, had a deep run in the Colossus (59th) and made the $10,000 No-Limit Hold’em Super Turbo Bounty final table.

Team Turner, currently in 2nd place, is being carried by WSOP POY leader Shaun Deeb’s 184 points thanks in large part to a $25,000 Pot-Limit Omaha title.

Each team is given 200 virtual dollars to bid on their eight players during the draft which took place May 29. Players who are expected to participate in a full schedule of WSOP events are auctioned off at higher prices than someone who either isn’t a top player or likely won’t compete in many events.

Team Brunson, owned by Poker Hall of Famer Todd Brunson, for example, bid $50 on Chris Ferguson, the reigning WSOP POY who most anticipated would enter tournaments daily this summer.

Jason Koon went for just $1 to the same team despite being considered one of the best players in the world due to the likelihood he focuses more on cash games and non-WSOP high roller events this summer.

But the best value draft pick of them all has been Mike Wattel, a 2017 bracelet winner who was acquired by Team Turner for $1 and has scored 129 points from four cashes and two final table appearances including a runner-up finish in the $10,000 No-Limit 2-7 Lowball Draw Championship.

Daniel Negreanu might be the 2018 WSOP $25K Fantasy Draft’s version of JaMarcus Russell, the top pick in the 2007 NFL Draft for the Oakland Raiders who had a brief and unimpressive NFL career.

Negreanu’s poker career has obviously been far superior to Russell’s football career, but he hasn’t been worth the $131 Team GO Bartstool GO, a team drafted by Barstool Sports blogger “Bartstool Nate” — known to his family as Eric Nathan – spent, more than any other player taken in the draft.

Despite playing numerous events, Kid Poker has only cashed twice this summer, both final table appearances including a 9th place finish on Thursday in $1,500 Pot-Limit Omaha Hi-Lo 8 or Better, and has only provided 63 points to the team that drafted him.

Negreanu also owns a $25K Fantasy team — Team Negreanu — which is currently in 13th place in the league (291 points) out of 15 teams. Daniel’s team has received more than half of its points (164) from Randy Ohel and despite spending $50 on Phil Ivey he isn’t getting much out of the poker legend — just 22 points — who is having a disappointing summer in his return to the WSOP after a three-year hiatus.

It’s hard to feel bad for Negreanu who is struggling in his own WSOP events and drafted a mediocre team, however. Prior to the start of the WSOP, he finished 2nd in the Super High Roller Bowl for $3 million. He’ll be fine.

it’s good that you participate in WSOP events and you get points for your team with a bag of 200 thousand dollars, we hope that our forum makes an event so create teams in a series of tournaments in a month and those that earn more points, but just one month of competition like the wsop of cardschat hehe

I like the Bar-stool Sports team, something what would be funny to implement in our CC League as Team name :p