Ryan Laplante and 15 other Team CardsChat members battled in the 2019 WSOP Colossus. And they all competed for the massive prize money the tournament’s winner will be awarded and a little bit more, including bragging rights. They also faced off in a last-longer bet which was won by George Mulry – forum member “natsgrampy.” 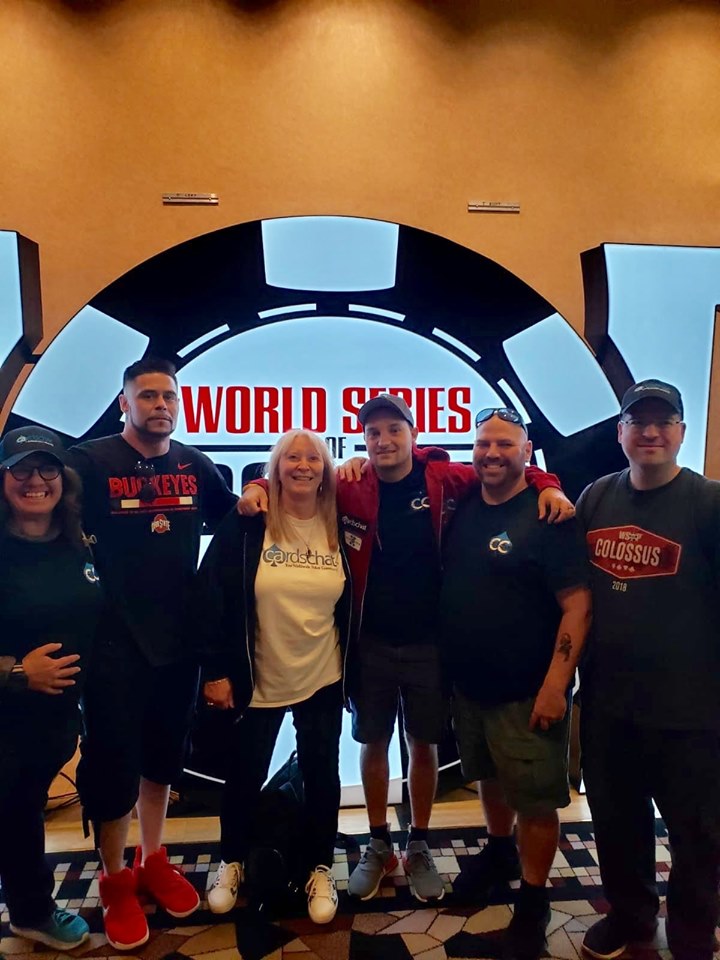 Team CardsChat members pose for a picture prior to the start of the Colossus on Wednesday. (Image: Facebook)

Mulry, the 250th place finisher ($2,246), outlasted the bunch, barely beating out Kenneth Nielson who busted in 423rd place for $1,521. Both players secured their first career WSOP cashes. And most importantly, had a great time doing so.

The $400 buy-in Colossus – which previously cost $565 to enter – had another massive field for the fifth straight year. Over 13,000 players, including our 16 forum members, entered this exciting event. This year’s number pales in comparison to the 22,374 entries in 2015, however.

It was still an excellent turnout and, for the first time ever, more than 10,000 players entered two separate WSOP events in the same year. Earlier this summer, a world-record setting 28,371 players registered for the $500 Big Fifty.

At the time of publishing on Saturday evening, 12 players remained in the Colossus. Unfortunately, none of the CardsChat team members were among those dozen still standing and won’t have a shot to win the $451,000 first place prize money.

A couple of our members went deep and we’re quite proud of their performances. George “natsgrampy” Mulry ran the deepest, bowing out gracefully in 250th place. Kenneth Nielson also had an impressive run that was cut short in 423rd place.

Ryan Laplante, our poker ambassador, was unable to cash for Team CardsChat in the Colossus. But he’s still having yet another impressive summer.

The Minnesota native has five WSOP cashes in 2019 including a third place finish for $154,268 in the $1,000 No Limit Hold’em earlier this summer. Laplante is a former bracelet winner after taking down $565 Pot Limit Omaha tournament in 2016 for $190,328. He continues to represent CardsChat well on and away from the felt.

The same goes for all of our team members who wore CardsChat gear during the Colossus. Fun was had by all. Many of our members gathered for dinner and drinks in Las Vegas and were all supportive of each other during the event.

None of our forum members made the final table this year, but we have a sneaking suspicion next year will be different. Props to those who competed for Team CardsChat, especially George “natsygrampy” Mulry who won the last longer bet. In doing so, he earned an extra $400.

Well done to George. George backed me in a stake in January I am very happy to see him doing well at WSOP.
My money was on the brother from The Land to last the longest and make the final table. Next time you will get them bro.
Awesome job by team Cardschat representing the forum at WSOP 2019.

Note – third line bottom from picture is missing the word “time” between great and doing.