Earlier this week, New Zealand’s Taehoon Han won the PokerStars Festival Korean Main Event to capture a ₩83,130,000 ($74,651) first-place prize. It was a surprise upset for the player, who faced off against fierce skills in heads-up play. 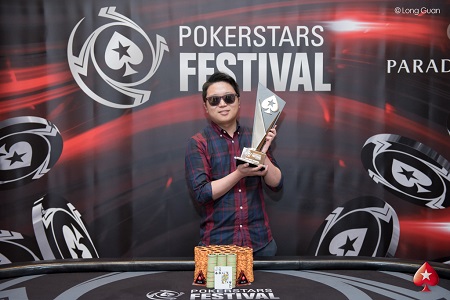 No deal: Taehoon Han’s decision to keep on playing turned out to be a good one. He took home the top prize in the PokerStars Festival Korean Main Event, trompling the more experienced Yuki Ko heads-up. (Image: PokerStars)

Deal or No Deal

The PokerStars Festival Korean Main Event drew 285 players to Paradise City Hotel & Resort in Incheon, including Team PokerStars Pros Randy Lew and Celina Lin. However, it was a little-known player from New Zealand, one who had moved to South Korea just days earlier, who prevailed over the pros.

The 26-year-old Han, with just $8,000 in live earnings on his poker résumé before the event, began the heads-up match holding a slight chip lead against the aggressive Yuki Ko, who had nearly $300,000 in earnings and had finished as the overall chip leader from the two starting flights.

Han initiated chop talks, but they fell through when Ko asked for more than half the remaining prize pool. After that, it was game on, and Han maintained his lead for the next two hours against his more experienced foe.

“This is my first big tournament cash,” Han said after the win. “It feels unreal … Good money, good result, that’s good enough for me.”

The inaugural High Roller event attracted 34 unique players who accounted for 28 re-entries, which created a ₩240,560,000 ($215,000) prize pool. That was distributed to the final table of eight, and it was Elia Gutierrez who fell as the bubble boy. He got it in holding ace-king against the ace-ten of Team Online’s Randy “nanonoko” Lew. A ten spiked and that was all she wrote for Gutierrez.

Qu entered the heads-up match against Japan’s Kazuhiko Yotsushika holding a 3-1 chip lead, though the latter did nearly even out the stacks. But Yotsushika ended up running a bluff into Qu’s three of a kind, and paid for it with his tournament life.

The next PokerStars Festival will take place July 28 through August 7 in Manila, Philippines.