Each year, readers of Poker.se vote in five categories for those they’d like to see win a Swedish Poker Award. For 2017, there were only four recipients, and that’s because Simon Mattsson (aka “C. Darwin2” online) took home two awards in the 9th annual competition. 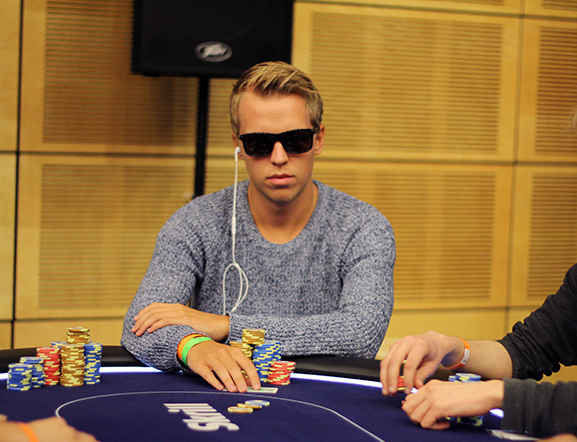 Simon Mattsson is proving to be one of the most intimidating forces among the Swedes in poker, both live and online. (Image: Lina Olofsson/PlanetWin365)

For the second year in a row, Mattsson was named Swedish Player of the Year, making the first time any player has taken the title in consecutive years. He beat out the likes of BERRI SWEET, Viktor Blom, “Compris,” and Niklas “Lena900” Åstedt for the title.

“It was tough competition and although I personally think that BERRI SWEET was worth the prize, I’m very happy to win it myself,” said Mattsson. “It is a confirmation that you do something right. Thanks to everyone who has voted.”

Additionally, he received the Swedish Poker Award for Online Player of the Year.

Mattsson first reached the top of PocketFives’ rankings in February 2016, and while he has slipped in and out of it since, he’s spent more time as the world’s number one online player than out of it.

According to PocketFives, Mattsson, both a WCOOP and SCOOP champ, has more than $7.6 million in lifetime online earnings with his biggest cash being $26,106. In 2016, Mattsson took down the Swedish Poker Award for both Player of the Year and Achievement of the Year.

And the (Other) Swedish Poker Awards Go to…

Another player to capture a Swedish Poker Award was online mystery player “BERRI SWEET,” who finished 2017 as online poker’s biggest cash game winner. The PLO specialist received the award for “Achievement of the Year” for winning nearly $1.7 million.

“2017 was my greatest poker year in my career and featured many interesting matches against exciting opponents,” the notoriously reclusive BERRI SWEET told Poker.se.

“It’s appreciated that my game has been noted … thanks to all those who make the poker an entertaining, stimulating and positive experience for humans.”

In other news, poker personality and player Peter Eichhardt, who signed with Partypoker, won the award for “Ambassador of the Year,” while “Breakthrough of the Year” went to Tomas Söderström, who made a deep run in the 2017 World Series of Poker Main Event. He finished as the last Swede standing in 247th place for $40,181.

“This has been an intense but very fun year in which I’ve focused a lot of my time playing live and traveling through most of Europe and Las Vegas,” Söderström said. “I have big plans for 2018 and will try to develop both within and outside the poker scene, and I hope that I’m in the nominations next year.”

That list of Sweden’s all time money winners is solid !