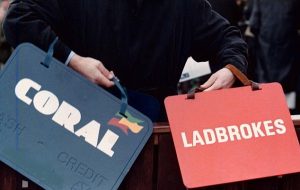 A flash deal between GVC and Ladbrokes Coral broke down as quickly as it came according to the Financial Times. (Image: thisismoney.co.uk)

On December 9, shares in Ladbrokes Coral enjoyed an upswing following news that GVC was interested in merging with the gambling operator.

Despite Ladbrokes and Coral only agreeing to their own merger earlier this year, GVC signaled its interest in joining the party late last week.

With talk of a tie-up between the companies being worth around $4 billion, interest from investors started to peak. But, almost as quickly as the talks started, they came to an end according to the UK’s Financial Times.

Although mergers have been the hot topic in the gaming industry this year, board members at Ladbrokes Coral went cold on another merger deal for the time being according to Davy Research analyst, David Jennings.

“They’ll do five months of heavy lifting to integrate, and then, after the regulatory review next year [at the end of March], you can start making a case for them becoming more active,” Jennings told the Financial Times.

Had negotiations progressed, Ladbrokes, Coral, and GVC would have become one of the largest players in the industry. Back in February 2016, GVC formally completed a $1.3 billion takeover of bwin.party to increase its online assets beyond its core brands Sportingbet, CasinoClub and Betboo.

With size on its side, GVC is now making a play to bolster its assets further ahead of further changes to the regulatory landscape. As analyst Jennings also noted, “scale is important” for every player in the iGaming industry at the moment.

Mergers Are a Must

In the UK, government ministers are currently considering a selection of new rules, including a ban on TV advertising during the day and reducing stakes on betting machines.

On top of these possible changes, the UK Gambling Commission recently announced a revision to its tax on free bets.

Although the rules have been relaxed slightly, operators with a UK license will still have to pay a 15 percent levy on any free bets they give to players from August 2017.

For poker players, the recent series of mergers should prove positive in the long run. With companies better equipped to handle to tough times, players should be able to benefit from the same bonuses and offers they’ve always been used to.

While a potential merger between GVC and Ladbrokes Coral might be out of the window for now, there’s a strong possibility it will be revisited in 2017 and that could prove to be another positive for players.